The OutKast man pops up to drop verses on his protégé's latest clip! 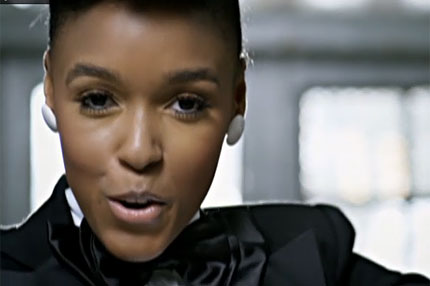 While the world waits for another OutKast album — it’s been four years since Idlewild, and seven since Speakerboxxx/The Love Below — Big Boi is keeping himself busy with an upcoming solo album and by big-upping one of his musical discoveries, the innovative R&B upstart Janelle Monae. Watch her fancy footwork, and a Big Boi cameo, in the just-released video for “Tightrope” below.

The song, off her upcoming album The ArchAndroid (out May 18, with production credits from Sean “Diddy” Combs and Big Boi, among others), draws inspiration from the Godfather of Soul, James Brown, both in its skittish rhythm and through Monae’s slip-sliding dance moves. The video takes place at the ficticious Palace of the Dogs asylum, where dancing is forbidden because it releases “illegal magical powers” — one of many fantasy worlds that Monae concocts in her songwriting.

Sporting her now-trademark sleek, fitted tuxedo, Monae waits for an opportune moment to break out of her room, then glides her way down the asylum’s bleakly-lit hallways. Big Boi shows up to dish out lines in front of an entourage of tuxedoed asylum residents.

What do you think of Monae’s new clip? Is she a soul savior? Sound off below.