Bella is caught in a love triangle in the British band's clip for "Neutron Star Collision (Love Is Forever)." 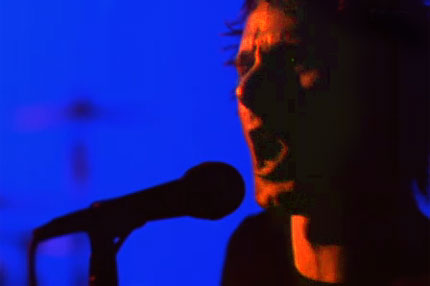 British rock trio Muse just released a new music video for their track “Neutron Star Collision (Love Is Forever),” the lead single from The Twilight Saga: Eclipse soundtrack, out June 8, and it’s as dramatic and emotional as the songs itself. Watch the clip, complete with Eclipse movie footage, below!

The video opens with footage of frontman Matt Bellamy pounding out the song’s classical melody on a grand piano on a dark, wide stage, before he switches to his guitar to rock out with drummer Dominic Howard and bassist Christopher Wolstenholme in front of a color-changing background. The performance is interspersed with Eclipse footage, focusing around the complicated love triangle between mortal Bella (played by Kristen Stewart), vampire Edward (Robert Pattinson), and werewolf Jacob (Taylor Lautner).

“Neutron Star Collision (Love Is Forever)” is a perfect fit for the romantic movie franchise. The song is about “looking right back on that moment that you first get with someone and everything feels like its going to go on forever,” Bellamy recently told BBC Radio 1. “[It has a] kind of like a cheesy love sentiment.”

Watch the video below, then tell us what you think in the comment section!