Metallica to Play ‘Mind-Blowing’ Gigs in 2011

The band's manager says they will rival Pink Floyd's The Wall tour. 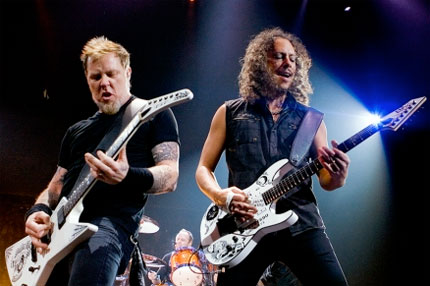 Metallica will play megashows in 10 cities in 2011 that will “blow your mind,” band manager Peter Mensch tells Classic Rock Magazine. “It will be Metallica’s equivalent of’The Wall.'”

So can fans expect a literal 40-foot wall or the huge animated projections and inflatable puppets that were trademarks of Pink Floyd’s epic tour? Mensch won’t say, but he suggests there’ll be at least a nod to rock’s past: “Between you and me, some of it is recycling stuff that people did 25 years ago but no one’s smart enough to know that we recycled it.”

As if Metallica’s live shows aren’t already dramatic enough. In the past two months, the band’s tour for their chart-topping album Death Magnetic has caused riots in Chile and Colombia, resulting in hundreds of arrests.