How many copies did the metal quartet's new album sell? Click here for details. 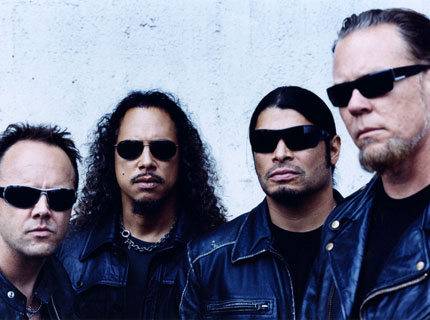 It’s official: Yesterday’s projections have held true and Metallica’s Death Magnetic has hit the No. 1 slot atop the Billboard 200 chart with 490,000 copies sold. The album — the quartet’s ninth to date — was dropped last Friday as part of a worldwide release effort. The record industry norm is to release albums on Tuesday, which makes Metallica’s showing all the more remarkable because it includes only three days of sales instead of the normal week.

What’s more is Death Magnetic delivers Metallica a world record as the only band to have five albums debut in the No. 1 slot, putting the quartet ahead of the Beatles, U2, and the Dave Matthews Band, all with four No.1 debuts.

As the highest number on the charts since the Jonas Brothers’ A Little Bit Longer — released on a Tuesday — pushed 525,000 copies just five weeks ago, Death Magnetic’s sales also bring the band their seventh album to date to move more than 300,000 copies in its first week.