The progressive three-piece introduces us to furry foes in their latest video. Click here to watch! 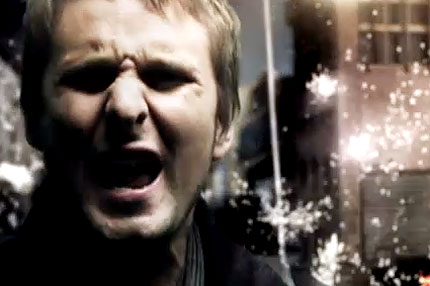 While we distract ourselves with flu pandemics and a crumbling economy, Muse, those space rockers from across the pond (and cover stars on our September issue), have identified the real threat: giant teddy bears bent on global destruction!

The just-released video for “Uprising,” the first single off the alt-rock trio’s latest album, The Resistance, has all the makings of a classic Muse track: ominous synths, wailing guitars, and, of course, urgent calls to arms amidst prophecies of worldwide conspiracy.

In the clip, the band rides through the streets of a matchbox town, performing the song from the back of a pick-up as the scenery around them ignites in flames. Cue those giant teddy bears (!), who rise from the ground, but not to tell us an adorable bedtime story like Teddy Ruxpin would. Oh no. These stuffed animals lay waste to everything in view. Sigh. Is nothing sacred?

Watch the video below — probably not a good idea to show it to any young child who’s got a teddy bear, though.