Yusuf Islam to Coldplay: I Forgive You

The artist formerly known as Cat Stevens pardons the Brit band for plagiarizing him -- and even invites them over for tea! 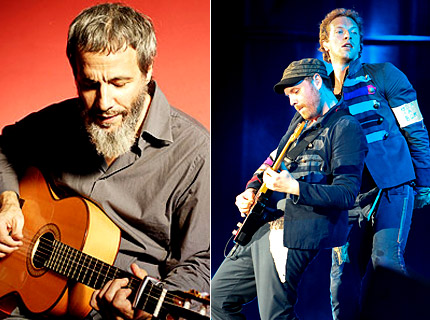 Yusuf Islam, the artist formerly known as Cat Stevens, has invited Coldplay to tea so that they can put the whole “you copied elements of my epic 18-minute song ‘Foreigner Suite'” thing to bed.

Don’t get it twisted: Islam still thinks the Brit rockers copped his material, it’s just that he doesn’t think they did it on purpose. They can’t help it if his genius permeates their subconscious, right?

“I stand by what I said. They did copy my song but I don’t think they did it on purpose. I have even copied myself without even knowing I have done it. I’ll write down what I think is a good melody and realize it’s the same as something I have already done,” Islam told UK paper Daily Express.

He then extended an olive branch: “I don’t want them to think I am angry with them. I’d love to sit down and have a cup of tea with them and let them know it’s okay.”

Ready with an apologetic stance at all times, Coldplay frontman Chris Martin had already replied to Islam’s allegation by conceding the possible reality that there may be “a musical phrase within [Viva La Vida] that does pop up in a lot of other things we’ve now heard.”

There now, that sounds settled. Come on Joe Satriani, get on the Peace Train!