Chris Martin and Co. are accused of ripping off guitarist Joe Satriani. Click here to stream both songs and decide for yourself! 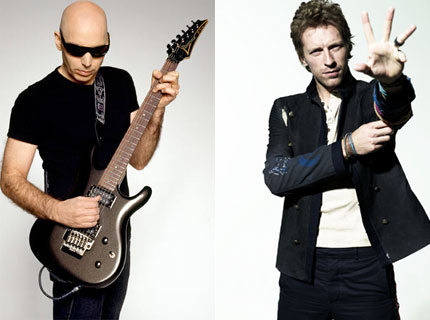 A day after Brit rockers Coldplay racked up seven Grammy nominations for their blockbuster record Viva La Vida, it seems their luck has taken a turn for the worse. Virtuosic rock guitarist Joe Satriani, 52, has filed a copyright infringement lawsuit against the band for allegedly lifting “substantial original portions” of his 2004 instrumental “If I Could Fly” for Vida’s title track. [Via MTV.com]

In the lawsuit, Satriani is seeking damages and “any and all profits” due to the alleged infringement. And this isn’t the first time this year that Coldplay have been accused of ripping off another artist.

In June, New York indie rock band Creaky Boards claimed Martin had written the melody to “Viva La Vida” after attending one of their shows and hearing their similar-sounding (not to mention ironically titled) song “The Songs I Didn’t Write.”

Why wait for the court’s decision as to whether or not Coldplay copied Satriani tune — stream both songs below and submit your verdict in the comments section.

Listen:
Joe Satriani, “If I Could Fly”