The Death Cab for Cutie frontman and the She of She & Him plan to wed. Click here for the juicy details! 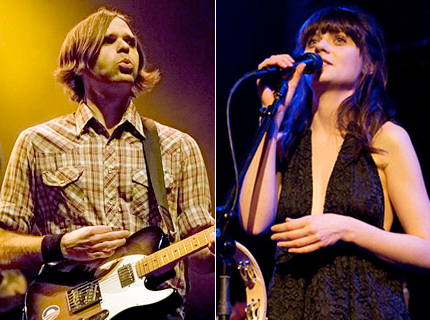 Maybe this is what Ben Gibbard had in mind when his band Death Cab for Cutie named its 2005 album Plans?

From the looks of things, Gibbard has been doing some serious future-talking with actress-cum-She & Him-songstress Zooey Deschanel: The pair are reportedly engaged to be married (via MTV.com).

According to a “source close to the couple,” cited by Us Weekly, Gibbard and Deschanel are “so thrilled…. Zooey was swept off her feet, and Ben is so excited.”

The pair are rumored to have been dating for almost a year, and they’ve even shared the stage together — dueting on a cover of the Everly Brothers’ “Dream” — at a Democratic National Convention event in August. Watch video of the performance below.

Mazel tov guys. We hope you have better luck than this pair. Now, what to get for the musical couple that has everything? A giant pair of cherries, perhaps? Oh wait, wrong registry.