A Day in the Life of…Justin Furstenfeld of Blue October

When he was in the first grade, Justin Furstenfeld’s teacher asked her students to write a poem about something they loved. “I came back the next day with a song written about a kite stuck in a tree,” the Blue October frontman tells me. “I sang it in front of the class and the teacher, Mrs. Sham, said I had a gift. She asked me to sing it in the cafeteria for the school at lunchtime. So, I did. And the moment I grabbed that microphone I knew this is what I wanted to do for the rest of my life.”

Flash forward to 1996, Justin and his brother Jeremy—with multi-instrumentalist Ryan Delahoussaye—form Blue October, unaware that the following decades will bring a string of seminal singles, including 2006’s “Hate Me”, consistently noted as one of alt-rock’s best.

2022 brings a much anticipated, yet-to-be-released 11thstudio album, following 2020’s acclaimed This is What I Live For, as well as an extensive year-long tour kicking off April 17 in Chicago. It’s Blue October’s live performances where Justin takes the time to connect with his audience in a deep and meaningful way, no doubt one of the many reasons their tsunami of fans keep coming back through the years. “You can let go of all your inhibitions and be crazy,” he says, of performing live. “You don’t have to audition, you can be anything you want. As happy, sad, angry, melancholy… anything.”

When asked what he misses most when he’s away, he says: “My children.” He is the father of daughters Blue (14) and Sayde (9), and son Gunner (6). “I miss Sayde’s excitement to see me and be around me. I love how Sayde looks at the world with all her colors. I miss Gunner because he’s so sensitive like his father. He likes to cuddle and I like cuddling a lot. I miss Blue because she’s my OG, my original gangster. So, I get to mess with her about things. I miss them a lot.” 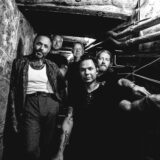 Amongst the meaningful talismans he brings with him on tour to feel at home away from home, are photos of his kids. “Pictures of my kids and my drum machine. And tattoo flash since my studio at home is full of flash and I like to collect flash from old-school tattoo parlors.” Tickets are on sale now for Blue October’s 2022 tour.

And in case you were worried, there’s no way he’s leaving music for a life in film, it’s just yet another way for him to expand his talent as a performer. “I just like to experience all different types of art,” he says. “I want to fulfill all of my dreams, not just one of them.”

Check out his 5 Albums I Can’t Live Without feature he did with us earlier this year, as well as SPIN’s Instagram Live events (@spinmag) where Justin is a frequent featured guest, including this Friday, April 1 at 12 pm ET.

Here’s a day in the life of Justin Furstenfeld.

Every day starts with  Prayer first, then music.

Breakfast consists of  Four-egg omelet with spinach and grilled chicken. No cheese, please.

To get going I always  Have a shot of espresso from my awesome coffee maker.

I don’t feel dressed without  My gold chain.

Before I start working I must  Eat. Do push-ups. Shower. I’ve got to have a morning shower to have a good day. I really do.

Currently working on  My new album, a new film, book, and how to have better friendship skills.

But I’d really love to be  Working on a new album, a new film, a book,  and how to have better friendship skills.

Book I’m reading  That’s easy. I’m currently reading Five Types of People Who Can Ruin Your Life: Identifying and Dealing with Narcissists, Sociopaths, and Other High-Conflict Personalities by Bill Eddy and When Things Fall Apart by by Pema Chödrön. I’m also reading the Big Book of Alcoholics Anonymous. I’ve read it quite a few times.