Stacked heels, glam Gucci ensembles and delightfully lascivious asides, Måneskin’s Saturday Night Live debut stunned. It was tamer than the quartet’s club show at New York City’s Bowery Ballroom gig in October, where bassist Victoria De Angelis played with only black electrical tape over her nipples and frontman Damiano David spat water (Iggy Pop-style) into the eager mouths of the rabid young female crowd. De Angelis and David then gleefully leaped into the arms of their adoring acolytes to crowd-surf, before David invited the entire audience on stage.

Everyone who could fit clambered onto the stage and squeezed in next to the band as they played. Dozens of thrilled, disbelieving women shimmied onstage. 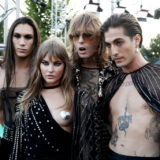 Possessed of the smolder of Elvis Presley (whom David shares a January 8 birthday with, along with David Bowie) and style and energy of Perry Farrell, David is seated side-by-side with his bandmates on a sofa in a Times Square hotel on a freezing January afternoon before they hit Stage 8H. With fuzzy coats, pointy boots, animal prints and frilly lavender shirts — and that’s the guys — the band look runway-ready. Måneskin are attentive and, barely of legal drinking age, shine with a fresh-faced decadence that smacks of ‘70s European jet setters.

The band’s cri de Coeur… the song “Zitti E Buoni,” sung in their native Italian, celebrates individuality, championing that “Your difference is your strength.” It won the 2021 Eurovision Song Contest — yes, the competition that Will Ferrell and Rachel McAdams jabbed at comedically with 2020’s Eurovision Song Contest: The Story of Fire Saga. But jokes aside, Eurovision is a huge deal, and the 2021 broadcast was watched by a total of 183 million in 36 European markets.

After collectively returning from a quick cigarette break, Måneskin acknowledged that although they’ve been playing together since high school (2015, for those who want to feel old), life has become BE and AE – before and after Eurovision. Actually, they clarify, it was winning Italy’s biggest music competition, Sanremo, last March that launched their wild ride and set the stage for Eurovision.

Only a few years ago, they were busking on the streets of Rome in tie-dye shirts and jean jackets. On Saturday Night Live, as stars of a Gucci ad campaign that celebrates the “joyful impetus of eros,” they’re on stage with Kristen Wiig, Pete Davidson and Willem Dafoe following the band’s sexually charged performance of “I Wanna Be Your Slave.” But being born 25 years after the show first aired, Saturday Night Live was not on Måneskin’s radar.

“Like we never watched it live as an appointment [television], but we saw plenty of sketches and tapes on YouTube and social media,” David says matter-of-factly. “Like, every cool person goes there.”

And despite Will Forte’s “Moan-a-skin” live TV pronunciation on SNL, it’s “Mon-e-skin,” a word tossed out by their half-Danish bassist as a potential band name in 2016. It means “moonlight.”

With millions in sales both in the U.S. and Europe, it seems that Americans are either oblivious to the charmingly upstart Italians or obsessed with them. “Beggin,'” their commanding cover of the Frankie Valli and The Four Seasons gem, went viral on TikTok. The song first appeared on Måneskin’s 2017 album, and it currently has 884,708,565 Spotify streams.

Covers of Iggy Pop’s “I Wanna Be Your Dog” and the Killers’ “Somebody Told Me” cement Maneskin’s place as rhythmically propulsive rockers — think Franz Ferdinand channeled through Hanoi Rocks and Marc Bolan. Thomas Raggi is a baby-faced guitar god, while drummer Ethan Torchio’s long black hair and buff physicality peg him as a goth Fabio.

Despite their insouciant charm, not a single band member is immune to their stratospheric success. “We all freak out.” a smiling De Angelis says. They managed to keep semi-cool upon opening for the Rolling Stones in Las Vegas on November 6, 2021, where the Italians decked out in matching red, white and blue stars and stripes sequined outfits.

And si, they met Keith Richards and Mick Jagger.

“The moment with Keith was amazing,” David says, his unbuttoned shirt showing off his Il ballo della vita (the title of the band’s 2018 debut that means “the dance of life”) chest tattoo. “He comes toward us, and he says, [David does a Richards drawl] ‘Hello, guys. I have no idea who the fuck you are. But I’ve been told that you’re doing great. So good job. I see you’re a real band with guitars and stuff. So keep doing like that. And good luck.’”

“In the dressing room with Mick was completely different,” David remembers. “It was, ‘Oh, guys, I know you. You’re amazing. Thank you for being here. It’s gonna be an amazing night.’ And he’s super energetic, and I don’t know how he managed to do that because he’s 73 [actually 78], But yeah, he’s like a demigod.”

Playing in front of an audience where they were mostly unknown was a challenge the band accepted.

“It was fun, but hard at the same time,” DeAngelis says. “When we got on stage at first, people didn’t know us, of course. And they didn’t really react to what we were doing. So…”

“It took five or six songs to get them into the mood,” David says, talking over his bassist. “But we had eight songs.”

“When we were done, we went down in the pits, looking at the gig and it was fun, because everyone was like, ‘Fuck, I didn’t know you, and you’re amazing, guys,’” DeAngelis says. “Like, older people, the age of our grandparents.”

Måneskin’s next major American show will be at Coachella in April, where the audience won’t be boomers. It’s safe to say there won’t be any new music by then, but David says he’s got tons of lyrical ideas — due in part to the success of the past 10 months.

“Basically, our lives changed and our careers changed,” he says, “So it feels very natural for me to describe what happened [and] what’s happening in my head with the music. Sometimes, it actually helps me understand what I’m going through, what makes me happy and what is not making me happy.”

But the frontman is coy about sharing details. “I started writing music even before Måneskin. My first lyrics are [when I was] 12 years old. But sometimes it gets hard, because you don’t have the time to settle down and just go through your mind.”

That said, David smiles. “Let’s say I’m talking a lot about myself, which I always do.”