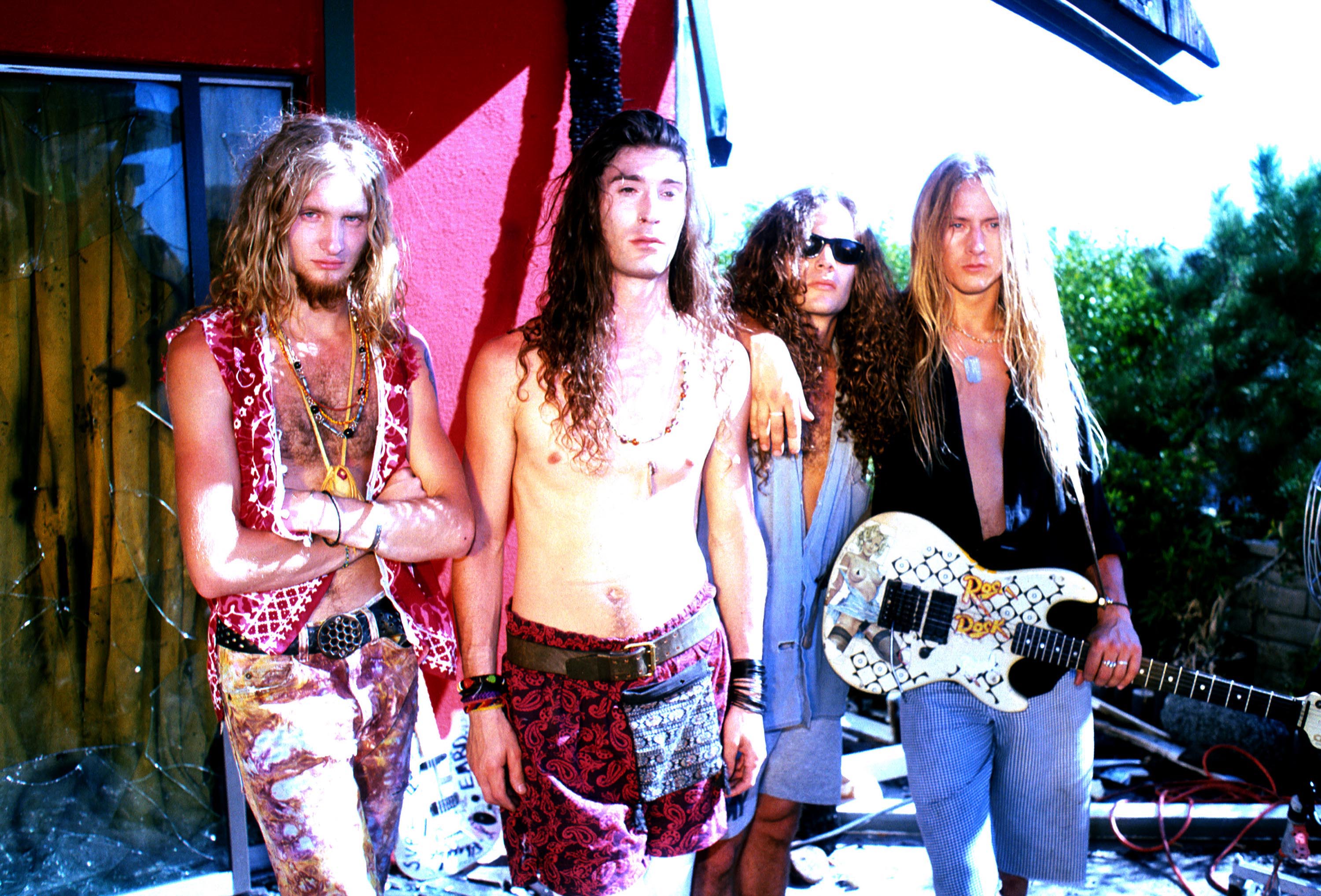 My parents got me into music lessons pretty young. So, around the time I turned 9, 10, 11 years old, I had been playing guitar for a couple of years. And then the grunge explosion happened — Pearl Jam, Soundgarden, Nirvana, Alice in Chains — and I was like, “Okay, this is it for me.” But I just gravitated toward Alice in Chains more than any of those other bands. Looking back, I have always been drawn to darker, more melancholy stuff, and out of those four bands, Alice in Chains was always the moodier, darker band. They were so heavy, but the music was so beautiful. Like the harmonies between Layne and Jerry were just — it just got me. And as I got older, I became a singer, and it just made sense to me.

After I saw a video for “Them Bones,” that was it. Dirt was the first album I bought with my own money. And then, going back, I realized that “Man in the Box” song I loved so much was on Facelift, so I went and got that. It’s been a love affair ever since.

I loved how Facelift was darker than Dirt — and that’s a pretty dark record. There’s something really ominous about the way Facelift sounds. The opening chord progression to “Bleed the Freak,” or songs like “Sea of Sorrow”…I mean, even the “Man in the Box” video is super creepy and almost scary when you’re that young. I just loved how epic it was. You sort of always equate these records in your life to the moment you heard them and how they affected you. With Facelift, it was nice to go back and hear where it came from. I know that they were on the tail end of that ‘80s glam scene, and Facelift is them transitioning into that moodier [vibe]: “Let’s start singing about our heroin problems.” I was a child, and I felt like they were speaking to me, even though I know they were singing about this really dark affliction. Something about it just made sense to me, and still does.

I was 16 when Facelift came out, so of course, I was hanging out, drinking beer with friends. My group of friends would spend a lot of time at my house, and it was actually David Isberg, the singer who formed my band, Opeth, who introduced me to them. I remember he came over with three records: Metallica’s black album, Nirvana’s Nevermind, and Facelift. I loved all of them. I was really impressed with them and became a fan instantly.

They had a Sabbath-y type grittiness. It was heavy, really heavy, and it was dark. They were also something fresh. For me, at the time, I was into death metal. There were a few bands I really that weren’t death metal bands, like Candlemass, Saint Vitus, and the Obsessed, that were kind of “okay” to listen to, even if you were into death metal. Because, at that age, it was really important to listen to the right shit. Alice in Chains provided something I guess I had been missing. They kind of meshed the darkness from some of the more extreme metal bands I was listening at the time with that melodic sense, which, of course, was just normal vocals. His voice jumped out at me, because it was a great vocal. It was something that had been missing for me. Out of all of those grunge bands from that time, Alice in Chains are my favorite.

They have that rare talent [for a heavy band] where they have sing-along-y type songs: very melodic, lots of harmony vocals, which I’ve always loved, ever since the Beatles and Abba and all that stuff. If you listen to those vocals, they are very complex, and the riffs are, like, weird. To this day, if I listen to Alice in Chains, I listen behind the vocal sometimes, and I go, “How the hell could they write a vocal line to that riff?” They were very inspirational for me — maybe the biggest inspiration on me from the 1990s. I think “Them Bones” was the first Alice in Chains song I ever heard — and it was back when they played videos — and I was really into the video and their whole look. From there, it happens a lot – bands will come out with stuff, and you’ll hear one song maybe later on, and you will go back and get all of the older stuff, and that’s what happened with me.

They have a really cool way of combining notes and bends that you didn’t hear back in those days. When Alice in Chains came out, with what Nirvana was going through, there were all these hair metal bands around and Jerry Cantrell with his really unique style of playing. Then, you mix that with Layne’s vocals, and the drums were always on-point, and the bass carries the guitar — they have a lot of songs where the bass is silent while the guitar is playing, and I love stuff like that. They’re very simplistic in the sense that there’s one guitar, one bass, one vocal, and what they do with that is just genius. When Jerry plays a solo, he will just play it over just the bass, and it will work; he won’t lay down a rhythm guitar track. Stuff like that is hard to pull off.

I like it when bands have new music that sounds new but still sounds like them. I don’t like it when a band completely flips the script and doesn’t even sound the same anymore. When I think about Alice in Chains’ catalog, it all had that really awesome familiarity but done in a brand new way, and that’s what I respect about them. I went to a Foundations Forum in the early ‘90s, trying to get Machine Head signed, and they were passing out samplers of Alice in Chains, and I remember Alice in Chains played, but I didn’t really get it when they played. But I ended up listening to the sampler and I was like, “Oh, man.” And Facelift blew my face off. It was just such a dark record, with so many great songs: “We Die Young,” “Man in the Box,” “Love, Hate, Love,” “Bleed the Freak.” The song “Sunshine,” I didn’t really get it immediately, but man, like three months into the record, that was my favorite song, and still is.

I caught them on that tour at the Omni, and they played to 30 people. We ended up getting backstage, me and my friend, and I was in a band called Vio-lence at the time, so I brought them a Vio-lence shirt, and they wore it on stage. We ended up talking to Cantrell for a second, and they weren’t very happy with the turnout. And then they played the next night with Screaming Trees at a club called the Ivy in San Francisco and opening was [Pearl Jam precursor] Mookie Blaylock, who my friend, Rob Cavestany from Death Angel, was like, “Oh my God, that was the best band I’ve ever seen.” And I was like, “They sucked.” I totally hated it because it was too happy. Alice in Chains came on and they were awesome.

Layne was a phenomenal singer, with incredible range, incredible emotion. Obviously, the harmonies between him and Cantrell were amazing. It was very melodic. It’s pretty much like a pop song, but the lyrical content and the nature of how it’s sung is just so dark. I have a connection with that for some reason.

[Producer] Dave Jerden did a great job with that record. The guitar tone…it was freakin’ savage for its time. It was so heavy, so dense, and so layered, and that was a big part of it. The music, it wasn’t metal, and we knew it wasn’t metal, but it just had that thick bass tone that was distorted and heavy and deep. Alice in Chains were, and continue to be, a massive, massive influence on Machine Head.