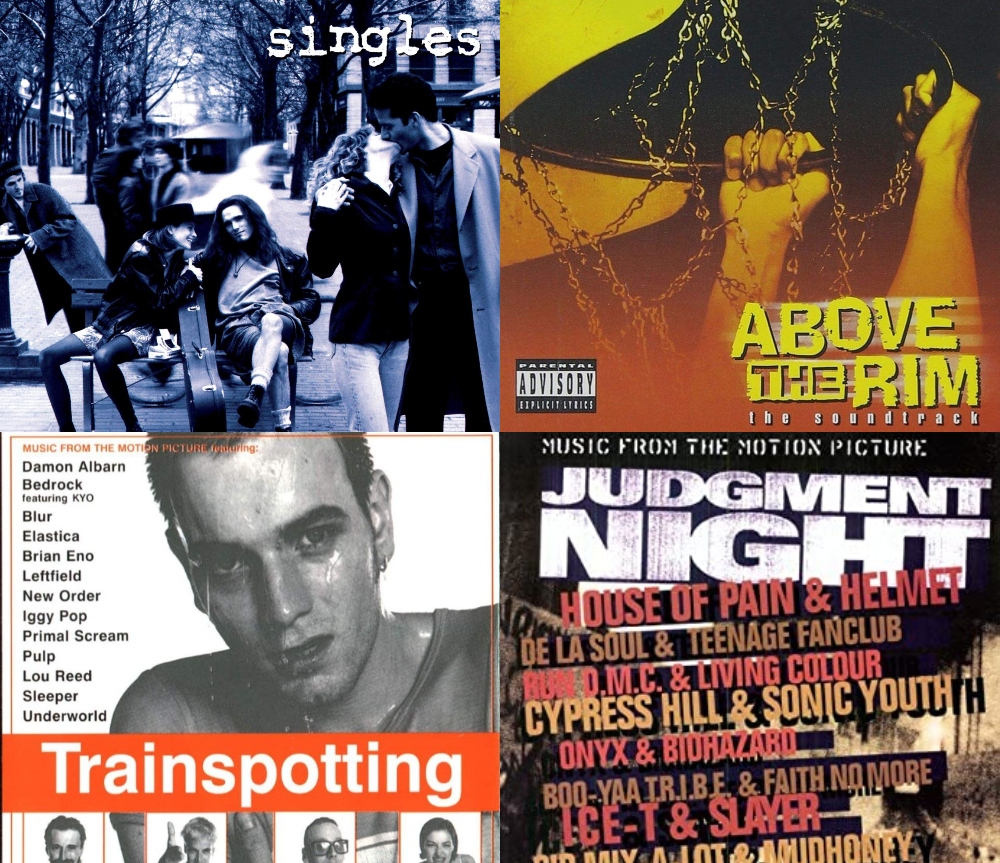 In the 1980s, music and film collided for cross-promotional blockbusters both transcendent (Purple Rain) and transcendently cheesy (Footloose). In the ‘90s, soundtracks continued to sell in the millions, capturing cultural moments like the Seattle grunge of Singles or the Britpop and electronica of Trainspotting. Auteurs like Quentin Tarantino and Wes Anderson reached deep into their record collections to set the mood while movies like Above the Rim and Menace II Society pioneered the concept of soundtracks as hip-hop mixtapes.

A great soundtrack can propel an unsuccessful single, like Seal’s “Kiss From A Rose,” to the top of the charts, or revive a decades-old hit, like Queen’s “Bohemian Rhapsody.” It can also push a cult singer-songwriter like Elliott Smith or Aimee Mann to an Oscar performance.

Here are 25 soundtracks from the 1990s that hold up as albums, not just as pieces of movie memorabilia.

25. Good Will Hunting: Music from the Miramax Motion Picture (1997)
Singer-songwriter and former Heatmiser frontman Elliott Smith already had a growing cult fanbase after releasing his third solo album, 1997’s Either/Or. But nobody could have predicted his unlikely rise to mainstream fame within the next year, when he stood onstage at the 1998 Oscars, competing with Celine Dion for Best Original Song. A fellow Portland resident, Gus Van Sant, decided to use a few songs from Either/Or and 1994’s Roman Candle in the biggest film of his career, Good Will Hunting, and commissioned a new Oscar-worthy Smith song, “Miss Misery.”

24. Boyz N The Hood (Music From the Motion Picture) (1991)
In 1986, a young O’Shea “Ice Cube” Jackson wrote the lyrics to Eazy-E’s debut single “Boyz-n-the-Hood.” Almost exactly five years later, Ice Cube, by then a major rap star, made his acting debut in John Singleton’s film named after the song. The Eazy-E track didn’t appear on the soundtrack, but Cube contributed a new song of his own, “How to Survive in South Central.” And the rest of the album showcased a rapidly exploding West coast rap scene, including Yo-Yo and Compton’s Most Wanted, that gained significant mainstream visibility from the film.

23. Wayne’s World: Music From The Motion Picture (1992)
The late ‘80s hair-metal culture that Mike Myers affectionately satirized on Saturday Night Live was waning by the time his “Wayne’s World” sketches became a feature film in 1992. So bands like Cinderella and BulletBoys had already begun to disappear from the charts when they appeared on the movie’s soundtrack (which, on a sentimental note, was the first CD that I ever bought). But the album also features some more timeless classic rock that accompanied hilarious moments in the movie, like the Jimi Hendrix Experience’s “Foxy Lady” and, most famously, Queen’s “Bohemian Rhapsody,” which soared to No. 2 on the Hot 100 — even higher than it reached in 1976. And co-star Tia Carrere’s fictitious band Crucial Taunt really ripped that cover of the Sweet’s “Ballroom Blitz.”

22. Batman Forever: Music from the Motion Picture (1995)
The two Batman movies directed by the late Joel Schumacher pale in comparison to the Tim Burton films that preceded them. But the star-filled soundtrack, which accompanied his first movie with Val Kilmer as Batman, made a chart impact that rivaled the Prince-powered 1989 Batman LP. There’s an awkward stylistic gulf between Batman Forever’s unvarnished alt-rock tracks (PJ Harvey, Mazzy Star, Sunny Day Real Estate) and more on-topic choices like Method Man’s wacky villain theme song “The Riddler.” Despite the odd mix of styles, nearly every song is good or great, including “Kiss From A Rose,” Seal’s minor hit unexpectedly vaulted to the top of the Hot 100 after it appeared in Batman Forever.

21. SubUrbia: Original Motion Picture Soundtrack (1997)
Richard Linklater’s SubUrbia didn’t strike a chord with critics like his earlier slice-of-life movies Slacker or Dazed and Confused. However, it earned cool points by featuring Sonic Youth, who contributed three tracks to the soundtrack, including a longer and more relaxed version of “Sunday” that’s far superior to the re-recording on 1998’s A Thousand Leaves. The soundtrack also opens with a killer cover of X’s “Unheard Music” by Elastica and Pavement’s Stephen Malkmus, along with one of Superchunk’s greatest non-album cuts, “Does Your Hometown Care?”

20. That Thing You Do! Original Motion Picture Soundtrack (1996)
In his directorial debut, Tom Hanks created one of the ‘90s best music films, tracking the life cycle of a hit song in the mid-‘60s. But That Thing You Do! wouldn’t have worked if the big song by imaginary band the Wonders wasn’t a plausible hit, and Fountains of Wayne’s Adam Schlesinger delivered: The title track, sung by Candy Butchers frontman Mike Viola, climbed to No. 41 on the Hot 100 — despite sounding straight out of 1964. The entire soundtrack album is an entertaining exercise in pastiche, featuring more catchy power pop by the Wonders and fictitious contemporaries like surf rockers the Saturn 5 and girl group the Chantrellines.

19. Dead Man: A Film by Jim Jarmusch (Music From and Inspired by the Motion Picture) (1996)
Jim Jarmusch’s minimalist, black-and-white western called for an equally stark score. And Neil Young provided it, improvising alone in a studio as he watched the Johnny Depp-led film. The resulting album is perhaps the best way for Young obsessives to hear his favorite guitar, Old Black, in all its fuzzed-out glory, with no vocals or backing musicians.

18. Twin Peaks: Fire Walk With Me Soundtrack (1992)
Composer Angelo Badalamenti has collaborated with David Lynch on most of the director’s films since 1986’s Blue Velvet. But his most enduring and influential work came with Lynch’s 1990 TV series — creating a strange and otherworldly cocktail of jazzy noir, saccharine balladry, synth drones and dream pop. Badalamenti mixes elements of the series score with new melodies on the follow-up feature film Fire Walk With Me, performing an entertaining monologue on “A Real Indication” and reuniting with Twin Peaks’ resident chanteuse Julee Cruise on “Questions in a World of Blue.”

17. Menace II Society (The Original Motion Picture Soundtrack) (1993)
Hip-hop was still coming to its own as a commercial force in the early ‘90s. And long before DJ Khaled albums or Rap Caviar playlists, soundtracks to Black films like Menace II Society were just about the best way for rap fans to hear a lot of up-and-coming MCs at once, including regional stars like UGK and Ant Banks. So the soundtrack to the Hughes Brothers’ debut film — promoted with singles by West coast rappers like MC Eiht and Spice 1 who were hardly household names — became a steady seller, charting higher on the Billboard 200 than any featured artist (other than Too $hort) had with their own albums at that point.

16. The Lion King: Original Motion Picture Soundtrack (1994)
They may have no idea what they’re saying, but multiple generations of American children can sing by heart “Nants ingonyama bagithi Baba,” the opening Zulu chant from The Lion King. It’s the biggest traditionally animated film in box office history, and it simply wouldn’t have been without the unforgettable songs by Elton John and Tim Rice. You may never play the album at home without young children who demand it. But there’s no denying the campy menace with which Jeremy Irons sings “Be Prepared” or the infectious exuberance that Jason Weaver, then fresh off playing a young Michael Jackson in 1992’s The Jacksons: An American Dream, brings to “I Just Can’t Wait To Be King” and “Hakuna Matata.”

15. William Shakespeare’s Romeo + Juliet: Music from the Motion Picture (1996)
“Exit Music (For a Film),” an evocative — if drily titled — song that Radiohead wrote for the end credits of Baz Luhrmann’s Romeo + Juliet, was kept off the soundtrack album so that it could appear a year later on their masterpiece OK Computer. But the song they sent in its place, live staple “Talk Show Host,” is a great track in its own right — perhaps the best Radiohead song that never appeared on one of their proper albums. And the biggest hits from Romeo + Juliet, Garbage’s “#1 Crush” and the Cardigans’ “Lovefool,” are both brilliant songs about the dark side of infatuation, capturing the perfect tone for a Shakespeare adaptation about star-crossed lovers.