Reexamining the album that truly made her M.I.A. just before the world needed her most 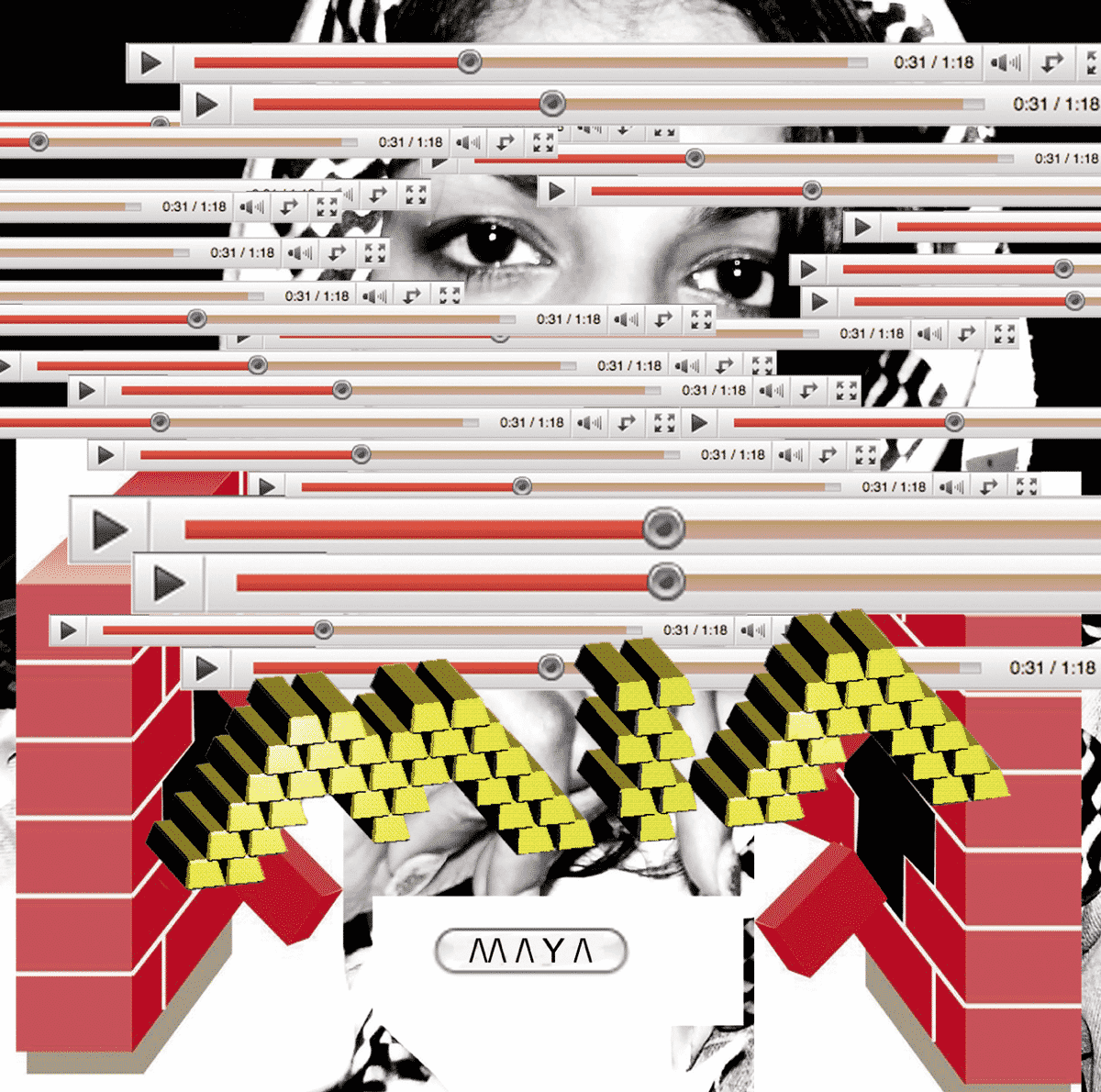 As the 2000s became the 2010s, no artist looked more poised to transform the landscape wholesale than Mathangi Arulpragasam, whom most millennials know as M.I.A. A brilliant Sri Lankan musician, political disruptor, and cultural synthesizer from London, she made music almost entirely about being exiled by birthright, about her complicated relationship with societal upheaval having an activist father with links to (but not, as oft-believed, actually in) the LTTE, about how rich music itself becomes when you look outside of spaces colonized by Western whites. Then she ate a truffle fry.

It’s instructive to look back on how deeply M.I.A.’s and Kanye West’s paths diverged as the 2010s took shape. Both were cutting-edge royalty beginning in 2004, pulling just about every musically inclined person into their worlds for several awe-inspiringly cosmopolitan works: Kanye took inspiration from Daft Punk, Jamie Foxx’s big-screen stint as Ray Charles, even Maroon 5’s Adam Levine. M.I.A. showed up on Missy Elliott’s final pre-hiatus album, got sampled by Vampire Weekend, and turned the Clash into the biggest audio dynamite of all with “Paper Planes.” She worked with Timbaland and Diplo and quoted “Where Is My Mind?” and “Road Runner” on a record that brought Tamil gaana music and indigenous Australian preteen rappers to a worldwide audience.

As with most artists who have been dubbed geniuses, they’ve frayed a bit as people; in 2020 one’s an anti-vaxxer and one’s a Trump-admiring, Megachurch-style born-again. But it’s not hard to tell how long Kanye was given a free ride (his line about eating “Asian pussy” with sweet-and-sour sauce hails from this very publication’s 2013 Album of the Year) while M.I.A. lost her procession of adoring critics almost overnight. Enter Lynn Hirschberg.

Almost two decades after the journalist got Frances Bean Cobain removed by child-protective services for printing in Vanity Fair that Courtney Love used heroin while pregnant, Hirschberg profiled Arulpragasam for the New York Times’ style magazine for the writer’s first piece on a musician in four years and spent very little time on her then-forthcoming album /\/\/\Y/\ (pronounced Maya, obvs) over the course of 20 pages. Instead, it demonized yet another mother-to-be from its opening grafs, speculating that the very pregnant M.I.A.’s Grammy performance had too much “artistic credibility” to resist and that “the baby would just have to wait.” The white writer goes on to describe Arulpragasam’s looks as “ghetto-fabulous-meets-exotic-princess” while making a point of mentioning that her armchair agitprop was spoken with a mouthful of truffle fry. Unsurprisingly, Hirschberg both ordered the fries herself — as only revealed by M.I.A.’s own recording of the interview — and denied them being a class signifier that, weird, everyone else noticed.

If this stuff all reads rather sweatily for the journalist in 2020, it didn’t 10 years ago, when plenty of media consumers proto-canceled the West’s premier pop star of South Asian descent because this profile was what lifted the veil for everyone about how much she wrapped herself in tank imagery and workaday quotes about political violence. You know, as if hundreds of Fred Dursts and Waka Flocka Flames before her had always exercised extreme caution in their gat-flaunting symbolism.

This stuff only matters as a part of M.I.A.’s historical trajectory; with an exception for the widely praised “Bad Girls” and its frankly breathtaking video (which Stereogum very possibly correctly named the best of the 2010s) she hasn’t been “critically acclaimed” since the 2000s when the amazing Arular and the deeper, wider Kala set a small world on fire and snuck to Gold certification thanks to Pineapple Express. We ultimately only give three fucks about the music, not how well she can debate the complexities of Tamil revolutionary politics when her proximity makes objectivity near-impossible anyway. (Though from where we’re standing, she’s done a lot more political good than bad, even if you’re bowled over simply by the sheer representation in the “Bad Girls” and “Borders” videos.)

Listening 10 years later, what /\/\/\Y/\ really throws into sharp relief is (how’s this for shallow) that M.I.A. is Madonna meets Public Enemy. She effortlessly evokes the former’s impossible signifier-juggling and culture-vulture voraciousness while issuing a standing, 24/7 dare to judge her chiefly by her visuals. But beyond the obvious, she has the latter’s career, and /\/\/\Y/\ is both her Fear of a Black Planet and her Apocalypse 91…The Empire Strikes Black; her tweeting Hirschburg’s phone number is more or less Chuck D publicly waffling on Professor Griff’s membership (or is it more her “By the Time I Get to Arizona?”). And her power drills ripstarting “Steppin Up” are Anthrax’s guitars on “Bring Tha Noize.”

At the time, most (though not all) reviewers charged that her whole system was breaking down, aurally melting into incoherent distortion and politically even more inchoate. That view had its legs in 2010, but after Death Grips, Oneohtrix Point Never’s Garden of Delete, the rise of speaker-blowers like Machine Girl, and countless unmastered SoundCloud rappers — not to mention the politically fucked industrial racket of Yeezus itself) — we owe her a damn apology. It shouldn’t have been too much to chew on that she sampled Suicide and tried on Auto-Tune at the same time.

She also has a lot more fun than Apocalypse 91, drinking on “Teqkilla” and smoking on “Space” and letting the blinding, misshapen mix carry out the provocations rather than her words, unless you make as much as SPIN did of her really-love-“Allah”-sounding “a lot” preceding “but I fight the ones that fight me.” As with Kala’s “Jimmy,” she turns a song you barely know (Spectral Display’s “It Takes a Muscle”) into an instant standard, and a bubbledub one at that. Debase her clumsy wit on the Google’s-connected-to-the-government “Them Bones” intro or “I’m down like your internet connection” and you diss Chuck D and George Clinton. Somehow the same America that sued her for flipping off the Super Bowl missed that she used her 15th minute of fame to release “XXXO” as a single, whose hook went, “You want me to be somebody that I’m really not.”

From its keyboard-warrior title to the cat-melting Sleigh Bells guitars on “Meds and Feds,” /\/\/\Y/\ is one of those follow-ups that flaunts its imperfections and self-centeredness at the expense of all casual hangers-on, a difficult-pop record for noise freaks who’d go on to champion Black Dresses and a DJ-as-hacker earscape that mostly made use of nearby materials; it’s her voice alone chanting the odd melody of “It Iz What It Iz” or dryly intoning “Lovealot,” and M.I.A.’s most rock album is probably her shortest on non-Western grooves. But it’s as great an achievement of harnessed chaos as any of its above-named successors and it should have kept her name in lights for far longer. Unfortunately, the very abrasions and discomforts that make it great are the same ones that made her NFL Public Enemy No. 1 before Colin Kaepernick took a subtler, more famous stand (er, kneel). At least she got the last bird.