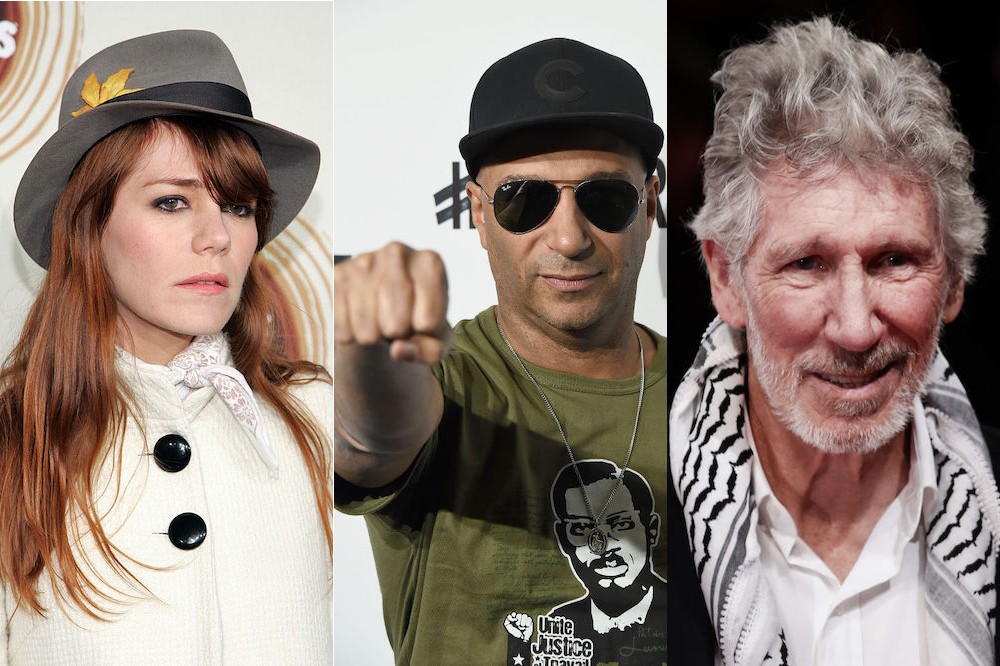 Ever since George Floyd’s senseless death at the hands of Minneapolis police officers on May 25, celebrities have been using their platforms to express outrage, educate fans on white privilege, call for change, and even help man the front lines during protests.

As demonstrations continued throughout the weekend, more and more musicians have spoken out against racism and shared video footage from the protests to prove police brutality has not let up.

“WHITE SILENCE IS VIOLENCE!” Roger Waters captioned a video of cops inciting violence. “The Police, & those they serve, would rather jack up the violence & burn down the town, than be held accountable under the law. How about, Murder in the first degree, life for killer… How about actual real law?”

“we need guardians protecting and serving our communities not warriors” Jenny Lewis proclaimed, while Tom Morello posted a video of a police officer flashing the “white power” sign while others cheered him on.

Others used their platforms to show fans how they can help. Green Day shared a graphic of places to donate, including Official George Floyd Memorial Fund, Campaign Zero, Minnesota Freedom Fund, Reclaim The Block, and Black Visions Collective, and Michael Franti encouraged having uncomfortable conversations with neighbors, friends, and family members.

See these and other responses to George Floyd’s death below.

Watch this video! The Police, & those they serve, would rather jack up the violence & burn down the town, than be held accountable under the law.

How about, Murder in the first degree, life for killer…

How about actual real law?

we need guardians protecting and serving our communities not warriors

They’d rather arrest hundreds of American citizens then 3 of their own. Very telling.

Cultural shifts happen when enough people say enough is enough. Now is the time to have that conversation with your family, neighbor, workmate and let them know they are not alone in believing that hate in all it’s forms needs to stop in our society.

We stand in solidarity with members of our extended human family who are grieving, fed up and protesting the systemic abuses of power that have led to the unnecessary and tragic deaths of so many people of color.

It’s not only about getting the 4 cops arrested that were involve in George Floyd death.Its about the government and this country acknowledging police brutality tours blacks and enforcing laws tours police brutality and corruption.

How loved ones want you to remember George… https://t.co/3qb5Cy7M5v

The world will be in a good place when I can chill and listen to Biz Markie do Albee Square Mall without thinking about how badly my fellow humans are suffering.

hey guys. as a show of solidarity with the protests happening across the US, we’re postponing todays dance class. as much as we'd love to come together with you all and share a moment of love, we’ll be spending our morning making more calls…

find the white man who did this to our beautiful city- he was not part of the peaceful #BlackLivesMatter protest.

Now is not the time to be silent. If you can, please join us in donating to one of the organisations who need our help https://t.co/ksMyts7N80 pic.twitter.com/vvPLwP3gJl