What Is Trump Doing to Nationals’ Catcher Kurt Suzuki? 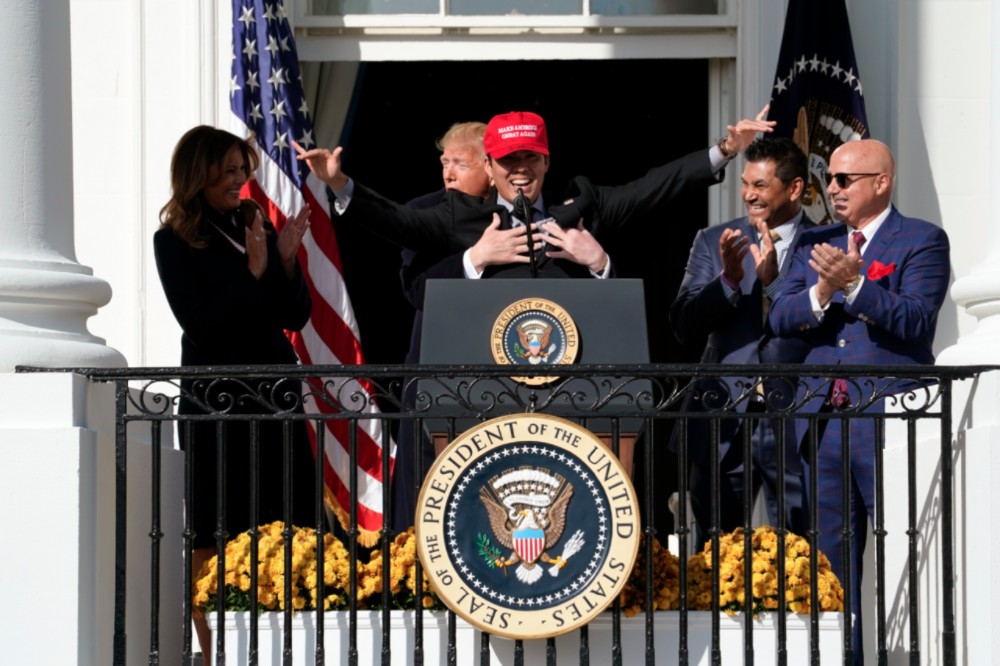 Most people would, at the very least, be disturbed if President Donald Trump crept up behind them and reached around to press his palms against their nipples and breathed his hot McDonald’s breath against their neck. Washington Nationals catcher Kurt Suzuki isn’t most people. In fact, he seemed pretty stoked when Trump decided to recreate Janet Jackson’s September 1993 Rolling Stone cover when the newly minted World Series champs visited the White House on November 4.

The weird from-behind hug happened after Trump summoned Suzuki to the lectern. Before reaching the mic, the catcher whipped out a hidden MAGA hat and put it on before addressing the crowd. The fact that a professional baseball player is a Trump supporter isn’t remarkable in and of itself. The sport has long been home to players who could be classified as conservative, Republican, or in Curt Schilling’s case, hard right-wing reactionaries. Trump’s overly emotive reaction to an athlete publicly kissing his ring, however, is a sight to behold.

The incident in question takes place at the 31-minute mark in the video below. Apparently, the appearance of the hat sent Trump on an emotional journey beginning with the president pantomiming  the exploding-head scene from Scanners . Trump then rested his hands on Suzuki’s shoulders in a half-hearted massage while the baseball player gave a bizarre two-handed salute to the crowd with both sets of pinkies and thumbs extended. With arms extended, Suzuki was primed for the big-spoon-in-chief to reach around and seemingly grope the athlete’s chest awkwardly.

Perhaps Trump was just happy to be received warmly in a public setting after getting booed by a stadium full of Nats fans during Game 5 of the World Series. Perhaps expressing genuine affection in a non-threatening way toward other is an interpersonal skill the toxic narcissistic hasn’t quite honed in his 72 years on this planet.

The one thing we can all agree on is that most people don’t want that guy sneaking up behind them.