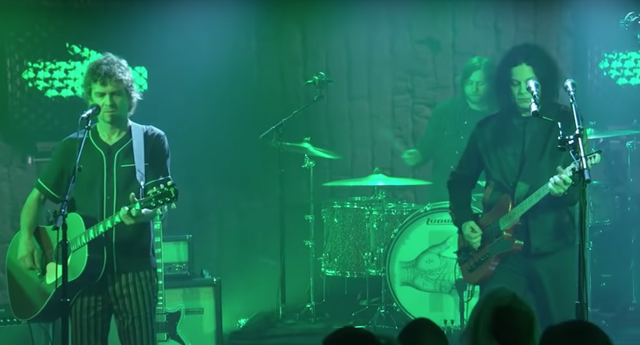 The Raconteurs were the guests on Jimmy Kimmel Live last night, performing two tracks from their June comeback album Help Us Stranger on the show’s smaller indoor stage. The band, which is co-fronted by Jack White and Brendan Benson, ran through the overdriven blues-rock track “Don’t Bother Me,” which features a blown-out lead vocal from White, and the more sedate Benson-led “Somedays (I Don’t Feel Like Trying).”

The band was previously the musical guest on The Late Show with Stephen Colbert for two consecutive nights in June, performing “Bored and Razed” and “Help Me Stranger” from their new album. The band is currently in the middle of a North American tour support Help Us Stranger, which is scheduled to run until late October. (Don’t even think about bringing your cell phone to these dayes; Jack White doesn’t use one, why should you?)

In a Rolling Stone interview earlier this month, Jack White intimated that he may have written a song with his possible friend Bob Dylan, with whom the Raconteurs once toured, but demurred before spilling any beans: “I wish I could tell you that, but I cannot.”

Read our review of Help Us Stranger here, and watch White, Benson, and the boys perform on Kimmel below.