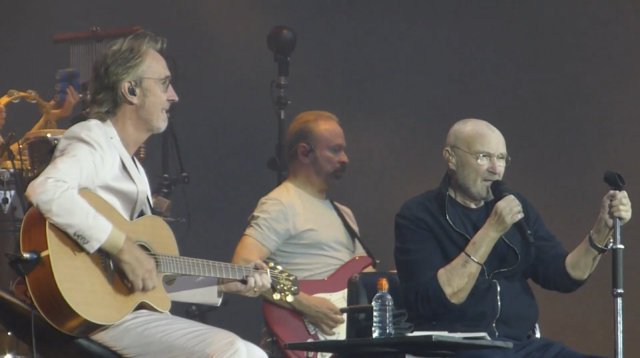 Phil Collins performed last night in Berlin as part of his Still Not Dead Yet Live! tour throughout Europe and North America. As Stereogum points out, Collins old Genesis bandmate Mike Rutherford has been opening the performances with his band Mike & the Mechanics, and at last night’s show, Collins brought out Rutherford to perform together for the first time since 2007.

The duo played a seated rendition of the Genesis hit “Follow You Follow Me” while projected images of their Genesis days were shown behind them. Earlier today, they performed the same song in Aarhus, Denmark.

Phil Collins’ eighth studio album Going Back was released in 2010 featuring covers of soul classics. Last year, he announced Plays Well With Others, a career-spanning box set with 59 songs, including collaborations with Brian Eno, John Cale, Robert Plant, Paul McCartney, and more. Watch clips of his performance with Rutherford below.