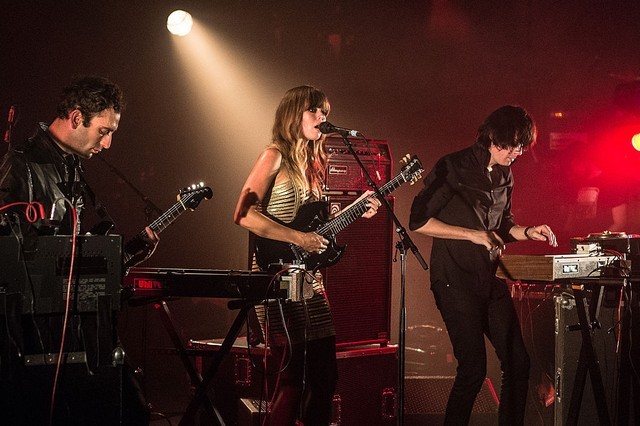 Chromatics make dark, pulsating, mysterious electro-pop music, and they keep things mysterious when they’re not making music, too. Or, rather, they keep things mysterious when anyone asks them whether they’re making music. More than seven years ago, the Los Angeles group released the gorgeous and cinematic double album Kill For Love. And for years now, they’ve been promising the release of Dear Tommy, its long-awaited follow-up. There have been one-off tracks (including “Time Rider,” earlier this year). There have been Twin Peaks appearances. There have been maddening announcements. Band mastermind Johnny Jewel has made a ton of music with his various different projects. And now there’s also been a live show.

Last night, Chromatics played their proper show — Twin Peaks performances don’t count — in more than five years. Their last show was a Los Angeles set in January of 2014. And last night, they played the Observatory in Santa Ana, California. Their setlist was heavy on old favorites, including their Kate Bush, Bruce Springsteen, and Neil Young covers. But Chromatics did play a couple of tracks, “I Can Never Be Myself When You’re Around” and “Time Rider,” that may or may not end up on Dear Tommy at some point in the undefined future.

Based on available video evidence, Chromatics sounded appropriately dark and glamorous last night. They played with a video-projection backdrop and a whole lot of pretty colored lights. And they looked cool. Below, watch some fan-made videos, including a clip of “I Can Never By Myself When You’re Around,” and check out the show’s setlist, via Setlist.fm.

“I Can Never By Myself When You’re Around”:

“Running Up That Hill”:

Although no one can touch the Kate Bush version, I still have love for Chromatics’ cover of this 80’s classic . Chromatics w/ Desire & In Mirrors “Running Up That Hill” (Kate Bush cover) 4.30.19