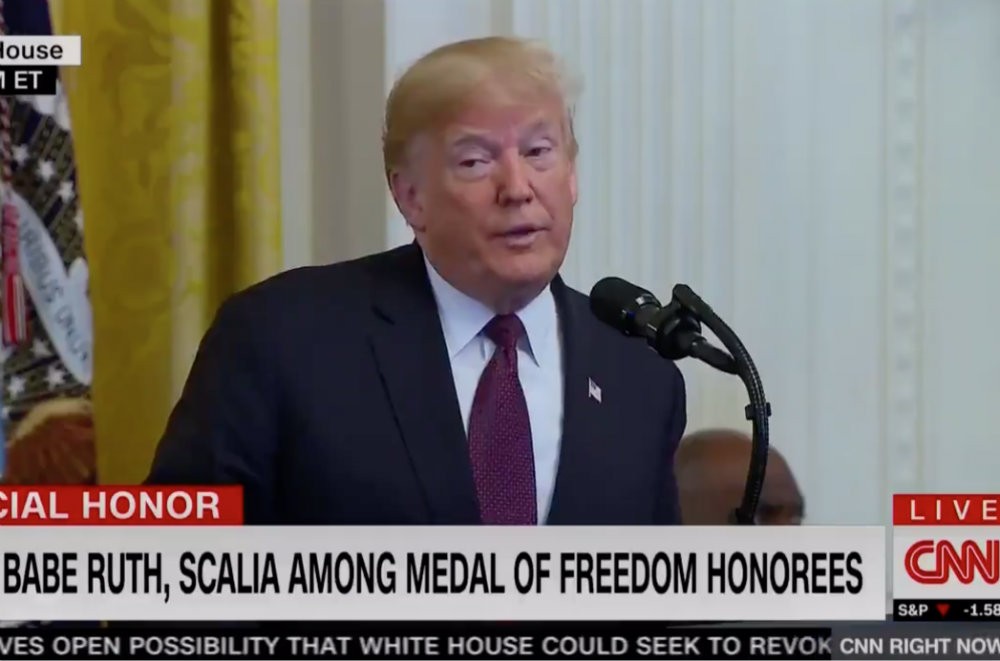 While handing out Medals of Freedom at the White House on Friday (November 16), President Trump took a moment to veer off-script and recount a personal anecdote about an Elvis Presley concert.

“I was there once, in Las Vegas at the Hilton,” Trump said. He described how fans were “ripping the place apart” and “screaming.” The show was so memorable, in fact, that Trump said he can still recall how it concluded: “And they announce ‘Elvis has left the house.'”

Trump fondly recalls how when he saw Elvis in Vegas, an announcer said, “Elvis has left the house.”

(The famous saying was actually “Elvis has left the building”) pic.twitter.com/WA5y5Vd2bM

Ah, that famous phrase we all know and associate with Presley, “Elvis has left the house.” Trump is almost certainly referring to “Elvis has left the building,” an oft-repeated remark apparently originating in 1956, when promoter Horace Logan said it over a loudspeaker to calm an unruly crowd in Louisiana. Elvis’s former concert announcer Al Dvorin subsequently made the phrase famous by repeating it after performances, letting the audience know there would be no encore.

It’s possible Trump did hear some iteration of the phrase in person: Elvis famously held residencies at the Las Vegas Hilton in the ’70s, well into the jumpsuits-and-mutton-chops phase of his career. At the time, Trump was an obscure but upcoming real estate magnate in his late 20s or early 30s who could’ve afforded to jet off to Sin City and see Elvis on a whim. Presley died in 1977.

Perhaps “left the house” was a slip of the tongue on Trump’s part, or perhaps the president’s brain has been consumed by mold. It’s hard to say.