On Friday March 23, Melania Trump was conspicuously absent from the traditional walk accompanying her husband, President Trump, across the South Lawn to Marine One, from where the chopper typically transports the couple to Air Force One for the first family’s weekend jaunts to Mar-a-Lago. Despite the fact that Melania was listed on the official White House schedule as a Marine One passenger that evening, the president was seen taking that walk and subsequent chopper ride alone as the first lady took a separate motorcade to the Joint Base Andrews airfield. According to sources speaking to US Weekly, Melania declining to take the traditional Marine One walk with her husband was likely due to the Anderson Cooper interview with ex-Playboy model Karen McDougal that aired on the previous evening. In the broadcast, McDougal claimed that the then-Apprentice Host picked her up at a celebrity golf tournament in 2006, had unprotected sex with her about three months after Melania gave birth to their son Barron, and apparently showed her Melania’s separate bedroom in a tour of his Trump Tower home.

“Melania is horrified by Donald and what he has done to them,” a source close to the family told US Weekly. “It’s not an easy time for her.”

“She is very, very unhappy with her life,” a source said. “If she could, she would get away from Donald and just be with her son.”

Reports that Melania deliberately avoided her husband on the way to Air Force One are bolstered by footage of the first family arriving in Florida. While leaving the plane, Melania doesn’t even try to put up a united front and uses Barron as a physical buffer while the president waves to the crowd. She then charges ahead down the stairs with her son rather than wait for her husband and descend the stairs together. Donald and Melania never touch, or even seem to acknowledge each other.

When US asked if the first lady had any comment on the interviews, Melania’s spokesperson Stephanie Grisham said that the first lady is “is focused on being a mom and is quite enjoying spring break at Mar-a-Lago while working on future projects.” Melania’s rep did not elaborate on what those “future projects” entail.

Another source told US that “the headlines are troubling, but she’s trying not to let it affect her.”

The first lady has a track record of abandoning traditional photo ops with her husband after reports of affairs go public. After news broke in January that the president’s longtime fixer Michael Cohen paid off Daniels shortly before the 2016 election, Melania backed out of a scheduled trip accompanying President Trump to Davos. Melania’s rep blamed the cancellation on “scheduling and logistical issues,” but she mostly spent the time visiting the Holocaust Museum before departing for an unannounced trip to Mar-a-Lago. A few days after InTouch published a 2011 interview where Daniels discussed her alleged tryst with Trump, the first lady again broke with tradition and took a separate motorcade to her husband’s first State of the Union address on January 20. Grisham said that Melania went to the Capitol early to greet guests.

Although revelations about the president’s alleged affairs and payoffs seemingly snowballed over the past few months, Melania seemed to be putting on a brave face. On March 19, the president and the first lady shared what looked like a tender moment as they embraced while the president caught his wife after stumbling on the South Lawn in high-heeled boots during the walk to Marine One.

That same night, the first lady accepted a kiss on the cheek from her husband at an event addressing the opioid crisis in Manchester, New Hampshire. 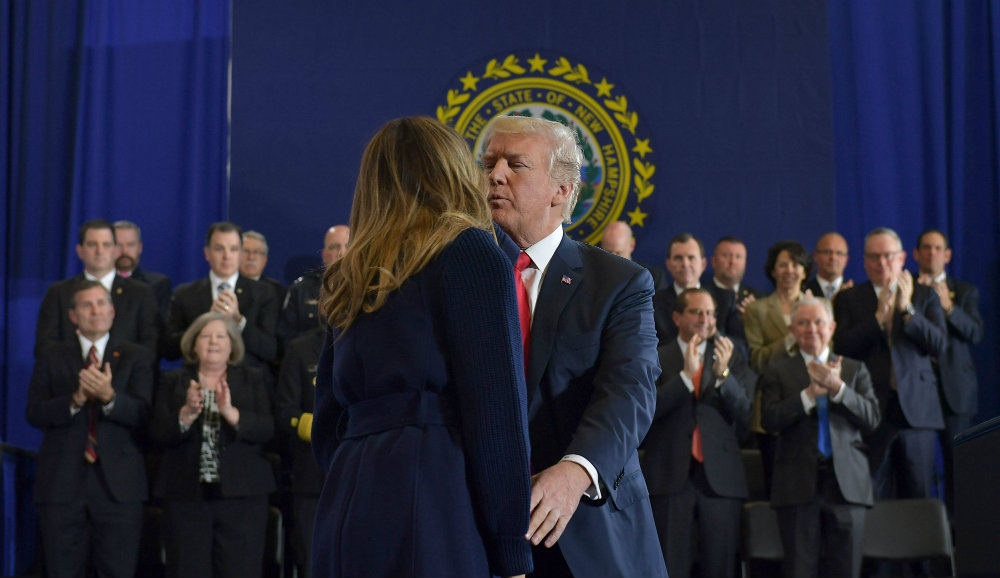 Thursday morning, just hours before the McDougal interview would air, Melania posted a snow day photo of herself posing with her husband with the caption “Greetings from the White House” on her official @FLOTUS account.

The next time the couple would be seen in public together would be the next evening when Melania blew past the president descending the stairs on Air Force One in Florida. Perhaps the succession of cable news interviews with the president’s alleged mistresses was her breaking point.