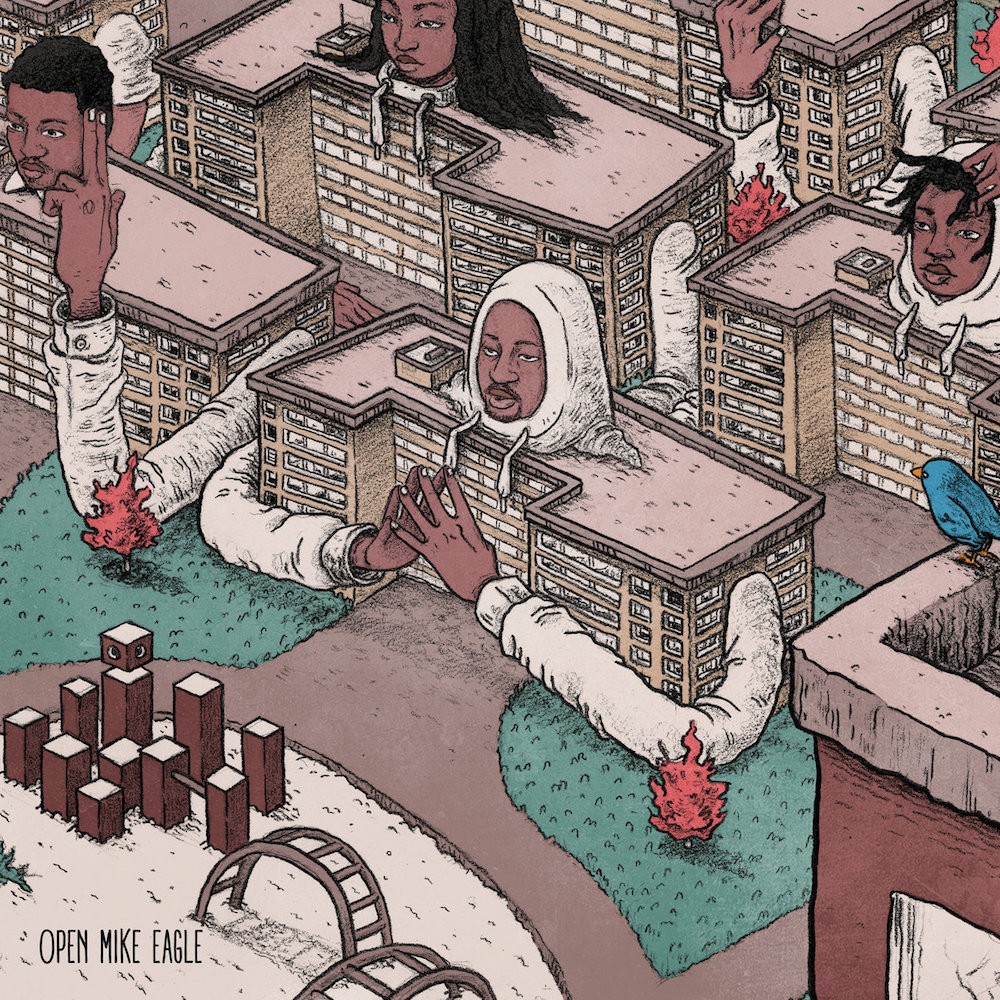 On his latest album, Brick Body Kids Still Daydream, Open Mike Eagle is not just an everyman rapper but the superhero Iron Hood, armed with crippling anxiety and an arsenal of wrestling moves. His greatest enemies are the blithe gentrifiers invading your bodegas and the white business-owners and developers displacing black communities for their own profit. Iron Hood’s cause is objectively righteous, but superheroism can only solve so much—there’s a reason why Batman fights the Joker, and not systemic oppression. In the video for album centerpiece “Brick Body Complex,” he faces off against a villainous property developer. The two sides engage in a physical brawl which climaxes with Iron Hood locking the faceless man in a sharpshooter. But just as victory seems within reach, the developer suddenly vanishes, and the video ends as cops show up to arrest our now alone and defenseless protagonist.

So it goes. That futility, which forms BBKSD’s core, comic-book style concept, is directly inspired by Chicago’s demolished Robert Taylor Homes, where Open Mike Eagle spent his childhood years visiting his aunt and first cousins. His relatable wit served as a coping mechanism in previous material, but now, it knives at an open wound. “They blew up my auntie’s building, put out her great grandchildren / Who else in America deserves to have that feeling?” he seethes in “My Auntie’s Building.” The communal memories of the Robert Taylor Homes are shared by a few, but the institutional forces that caused its rise and demise are widespread. Open Mike doesn’t dawdle thinking about those forces, veering away from explicit sociopolitical commentary to focus on the mementos of lives lived, since razed by reflective orange vests and white strangers.

“Legendary Iron Hood,” where he sing-speaks with the shaky cadence of a boy fighting against that emotional lump on his throat, sets the tone. Our narrator takes a pained look at his home: His father’s a hardened man, mother’s a ghost, and his brother Charles falls in with a bad crowd. Charles eventually gets hurt and Open Mike recalls he got “swole ’cause I wanted revenge.” He never sees the “asshole” again, but he loses himself inside that armor—”My old self locked away, no key to the cell.” This is a hard upbringing as superhero origin story—a dynamic that runs throughout the project.

Through BBKSD, Open Mike copes with his complicated love for the hood. Nobody adores the struggle, but at the same time, it’s what made you. That conflict is contextualized over the wistful clacks on “(How Could Anybody) Feel at Home,” where he raps “We live in a space that should have never existed”—and yet, it’s still a home. What’s shared there doesn’t simply exist in the past; for Open Mike, “Everybody’s secrets inspire all of my scenes.” BBKSD is his testimony for the stories erased for the sake of white comfort. As he says on “Daydreaming in the Projects,” “I rhyme for survival, so the art is a bonus.”

BBKSD’s subject might come across as maudlin for a 36-year-old whose career is still on an upswing. His discography is in solid critical standing and “The New Negroes,” originally Open Mike Eagle and Baron Vaughn’s comedy showcase, has been greenlit for a Comedy Central series. However, what demolished the Robert Taylor Homes a decade ago—a white-dominated power structure where black life exists with provisions—is still omnipresent. The resulting anxiety doesn’t only belong to Open Mike Eagle, who cedes the spotlight to fellow Mellow Music Group signee Has-Lo on the breezy highlight “95 Radios.” He’s mainly focused on small-scale joys and woes, the memories of listening to A Tribe Called Quest and bespectacled Stefan, who “saw himself doing things he would live to regret.” These are passive recollections that come off as quietly rebellious, because he plainly acknowledges the value of the black voice, as well as the weight of its silence: “Hard to express when the world is listening / Hard when you’re sure that the world is not.”