Lucy Dacus used to want to be a film director. Growing up in Richmond, Virginia, the 21-year-old singer-songwriter watched Alfred Hitchcock’s Rear Window and Federico Fellini’s Amarcord for inspiration. When it came time to apply to college, she “got a big ol’ scholarship” to attend Virginia Commonwealth University for film studies — but she only made it a year and a half, becoming disenchanted with film-world politics.

“The industry is like, you have to do a bunch of other people’s work before you do your own,” she notes from her perch on the second floor of Rough Trade Music in Brooklyn. “The work that people hate. I just wouldn’t be able to do it. I couldn’t edit a misogynistic rom-com and be like, ‘Yeah, my life is fulfilling! Thumbs up!’ I couldn’t tell myself that honestly.”

But Dacus doesn’t feel like she gave up anything — quite the opposite. These days, she’s quickly gaining recognition for her husky, mature-beyond-her-years singing and hyper-observant songwriting, as evidenced on this past winter’s tender debut, No Burden, which will see a physical re-release via Matador on September 9. Sitting in a roped-off section of the Rough Trade venue, watching her band sound check hours before she’s due to play on an early-June evening, Dacus talks about how she grew up balancing her two creative loves.

“I guess my love for [film and music] is really similar,” she says. “Film is like sculpture, writing, acting, technical arts, all sorts of arts. And that’s why I wanted to do it for so long, because it would include so many places for attention.“ 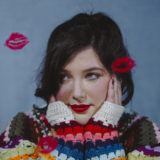 Lucy Dacus Calls Back to Childhood With ‘Kissing Lessons’ Video

From the way she describes it, Dacus’ friends were the first to act surprised at her going to VCU. “This is great, but we don’t know why you’re not auditioning for American Idol, or something,” she quotes. Dacus would laugh them off (“I was like, ‘F**k no, that would be so bad'”), thinking of music more as a hobby than a viable profession. “I just wanted to do film, thinking music was a pipe dream that doesn’t actually happen for people,” she says. “My mom is an elementary-school music teacher. For her, music is an educational tool. My dad plays guitar in the church band, so it’s like music as a service. He plays at old-people homes, so that’s like music as a gift.”

For a side project, though, Dacus was always heavily involved in Richmond’s art scene. Coming of age listening to Bruce Springsteen, Prince, and Broken Social Scene, Dacus began playing solo shows around town during her senior year of high school, opening for local bands like indie-pop trio My Darling Fury. “People would find out that I did stuff and email, and I would show up with a guitar,” she says. “I got productively peer pressured into playing live. They were like, ‘You have to do it. You should do it. We really want to hear it.'”

Eventually, her audience grew — so much so that Dacus decided to take a semester off from school to record No Burden and tour. And she hasn’t looked back since. “I left because the album came out better than we thought it would,” she says.

Dacus originally intended to DIY-record No Burden and post it to Bandcamp as part of a school project for bandmate Jacob Blizard, but the group changed course and decided to put their effort into recording at a real studio. They teamed up with producer Collin Pastore, a mutual friend, and booked some time at Starstruck Studios in Nashville.

“We were always trying to go and record with [Collin],” Dacus remembers. “There was a day that wasn’t booked and he was like, ‘We have this one day if you guys want to come in.’ We had to record basically everything except harmonies and guitar overdubs. We did it in, like, 12 hours on one Saturday.”

First put out on Richmond’s EggHunt Records, No Burden houses poignant singles “I Don’t Wanna Be Funny Anymore” and “Strange Torpedo,” easygoing but discerning numbers pieced together in Southern-tinted punk tones. Dacus’ singular style peaks on the former track, which she says was inspired by her being “a bad person” in middle school. “I was being mean,” she elaborates. “I was like, ‘Huh, the TV has taught me that I will be better off if I am popular. I will locate the popular people and I will become popular.’ [I was] really selfish.”

“But everyone during that time is experimenting with manipulation,” she reasons. “In middle school, you’re figuring out how you’re affecting people, and sometimes you’re affecting people negatively. And what sucks is that it can affect people for their whole lives. I didn’t realize I was a part of that. What can you do to even help that? How do you teach a kid not to be awful? You kind of have to let it happen, and let everyone figure it out for themselves.”

Dacus’ self-aware singles eventually reached the team at Matador Records, home to indie-rock kingpins like Yo La Tengo and Belle and Sebastian, among many others. After opening for Julien Baker in Washington, D.C. this past January, label co-owner Gerard Cosloy contacted Dacus, who, at the time, was fielding offers from “like, 20 different labels.” But Matador in particular stood out to her. “They’re one of my favorite labels,” she says. “The thing about Matador is their artists really stay with them. That’s so cool to me. A lot of people just do a couple albums, then switch.”

In the time since her signing, Dacus has secured a full backing band, a spot on NPR’s Tiny Desk series, and even a television segment on CBS This Morning, no to mention some noteworthy interviews. The whirlwind of attention will likely intensify as Dacus prepares to release a No Burden follow-up with Matador. If she had it her way, she’d be in the studio tomorrow — though time doesn’t allow for that right now. “We’re going to tour so much,” she says. “But I would love to have [a new album] out next year.”

As for filmmaking, Dacus appears entirely comfortable leaving that side of her in the past, save for one note of reservation: “I miss communicating visually,” she admits. “I want to make more music videos. We did one — it went over okay, but it wasn’t what I would have made.”

Still, music gives Dacus something the film world can’t when you’re young and (relatively) broke: control. “I imagine being able to make something where every element is something I had chosen,” she says. “With music, I can write the song and then play it. It’s directly what I think and there’s no confusion about who made what choices or who’s paying for it. We’re just making it. It just feels better.”