Dave Grohl's HBO tie-in takes their sound all over the map, literally 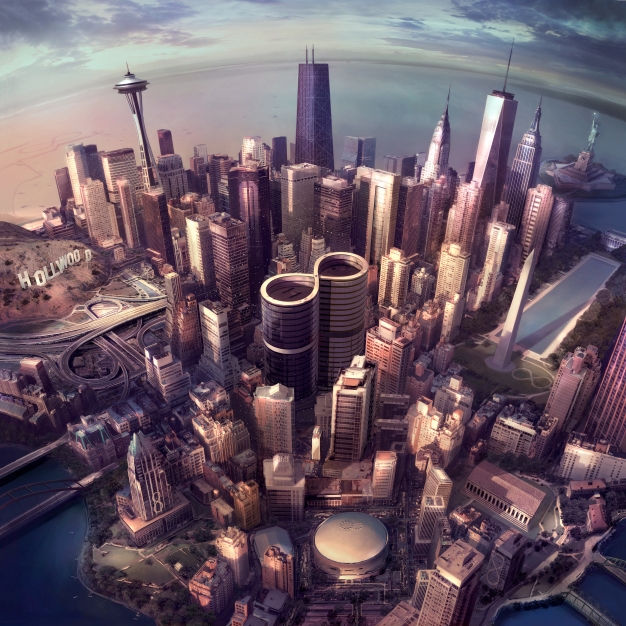 These are weird times for alt-rock lifers. During a recent week-long residency on Late Show with David Letterman, the Foo Fighters hauled Zac Brown onstage to chug through Sabbath’s “War Pigs,” allowing a country singer with ten No. 1 singles to bellow about witches at black masses while a founding member of the Germs swayed behind him. Likewise, the conceit behind both Sonic Highways the HBO series and Sonic Highways the Foo Fighters album seems to be an analog throwback in an era of digital surprises, the band’s continent-wide dash reminiscent of such vintage rock star stunts as Phil Collins piloting the Concorde in order to grace both Wembley and JFK Stadiums with his Live Aid presence.

Throwback or not, Dave Grohl’s new conceptual experiment — band plus camera crew visits eight population centers, soaks up local color, writes lyrics on the fly, releases album as promotional tie-in — seems unusually hubristic for the Nicest Guy In Rock And Roll. Self-directing a television series in which all of America’s musical tributaries serve as a backdrop for one’s own band cutting an eight-song album — it brings to mind Bono in his messianic prime. Yet the resulting album is surprisingly deft and engaging. Grohl’s too gifted a melodist/arranger to deliver anything less than a fistful of quasi-anthems, even when stray couplets fall flat (“Save yourself / Behave yourself”). As travelogue, Sonic Highways remains largely inscrutable: those who clucked at Taylor Swift’s “Welcome to New York” for failing to critique William Bratton’s stop-and-frisk policy might concede that Grohl’s own NYC ode is even vaguer, what with “reasons beneath the subway floors” and an “I AM A RIVER” chorus oddly echoing R. Kelly’s outrageous claims on “The World’s Greatest” (even bridge-and-tunnel hero Springsteen merely went down to the damn thing).

But toss the lyric sheet aside and Sonic Highways becomes their most pleasurable album since There Is Nothing Left To Lose, with which it shares a goofy penchant for classic-rock quotation and pastiche. Where the 1999 release swiped a James Gang ascending guitar figure for “Gimmie Stitches,” the new one snags Joe Walsh himself to peel off a few licks (“Outside”). Where once the Fighters settled for a blast of talk-box to conjure Peter Frampton (“Generator”), they now lift Dio’s “Holy Diver” riff outright — the better to surround Cheap Trick’s Rick Nielsen on “Something from Nothing.” And while the excellent D.C.-centric raver “The Feast and the Famine” appropriately suggests Fugazi’s patented chime-and-thrash, the ostensible Seattle number (“Subterranean”) unexpectedly resembles Big Star at their most lush and swooning.

No surprise, perhaps, that this former Seattleite and child of the D.C. suburbs sounds most comfortable when he’s exploring either city’s familiar geographic terrain. Elsewhere, Grohl’s efforts to distill the totality of Yankee popular song into power-chorded tailgate anthems seem fueled by the kind of grand folly that once powered rock operas and triple-LP sets. Good Ronnie James Dio fans that they are, the Foo Fighters most likely wouldn’t have it any other way.