‘Put a Bird on a Bird’: 10 Best Moments From Fred and Carrie’s ‘Portlandia’ Reddit AMA

Portlandia‘s star creators Fred Armisen and Carrie Brownstein popped into Reddit today for an “Ask Me Anything” that touched upon everything from his new gig on Late Night, her past with Sleater-Kinney, and whether one should, as they say, “put a bird on it.” Here are 10 highlights from their frequently hilarious, often insightful AMA. The banter is strong with these two (it doesn’t hurt that they were in the same room at the time).

How much of the show is scripted and how much is improvised?
Fred Armisen: 90% improvised and about 10% scripted…we sort of write out a storyline, and then we do our own dialogue.

What was the inspiration for Peter’s pasta addiction and will they go anymore adventures like starting a B&B??
Armisen: That came from a real dinner that Carrie and I had in Los Angeles. And we were looking at the menu, and we just thought “well obviously we can’t order pasta, so I guess we have to order this.” So we started talking about, why do we have to avoid pasta so much? So it was more that we were weighing the difference between the difference between enjoying life and really living, or ordering salmon.
Carrie Brownstein: or salad. And we talked about how, on our deathbeds, we aren’t going to say “I’m so glad I ate so many salads.” And then we watched jealously while this hearty Australian couple at a giant bowl of pasta. And were really unhappy.
Armisen: I forgot about that.
Brownstein: We sat and watched it like porn.

Fred, has anyone ever told you that you have beautiful eyes?
Brownstein: All the time! All the time people do! That’s why he had to start wearing glasses, because it was distracting people. Imagine two unicorns walking around. That’s what Fred’s eyes are like. 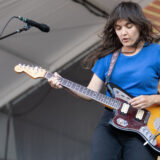 How are you able to maintain such an intimate friendship while doing something as stressful as Portlandia? And for Fred: is the gig with Seth Meyers going to affect Portlandia negatively in any way?
Armisen: It’s because of our friendship that we are able to work easily. And never. All experiences are positive. Because any negative experience I’ve had in my life has led to Portlandia, so therefore, they all benefit the show, and schedule-wise, when we’re ready to start writing in May or maybe even April, then I’ll focus on Portlandia. So it all helps it out.

What is the dream of the ’90s?
Armisen: Lollapalooza for ever, and ever and ever. Mainstage, side stage, all of it.
Brownstein: I think the ’90s had this…monolithic quality to them. Because it was pre-9/11, and everybody thought we were veering towards the Millennium, with all of these institutions in place, and the notion of the future was that it was going to keep getting bigger and better. It seems like a pre-anxiety decade to me.

Carrie, out of all the stuff you have released musically, whether it be Sleater- Kinney, Excuse 17, or Wild Flag which album are you most proud of?
Brownstein: I think my favorites are Dig Me Out, and One Beat.
Armisen: What about The Hot Rock? It’s just one of the best albums I’ve ever heard.

How do you react to criticism of Portlandia that comments on how the show is inspiring people to move to Portland, therefore contributing to gentrification issue and population issues in the city?
Armisen: I don’t think a TV show has that big of an impact on migratory patterns. It’s just a TV show.