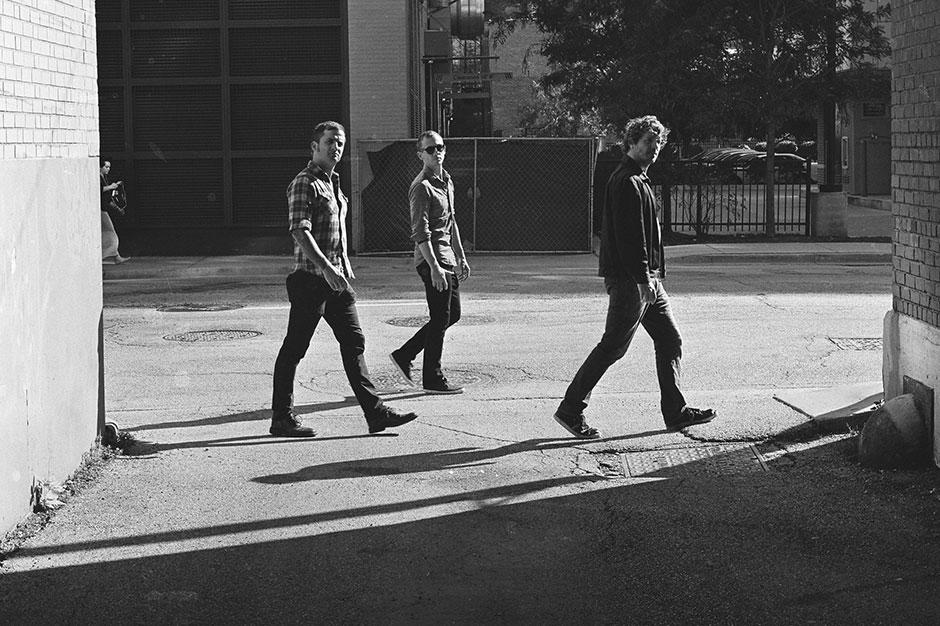 “I’m always like, ‘Yeah, motherfucker, I’m just gonna melt some cheese on Doritos!'” That’s Lawrence Arms vocalist/bassist Brendan Kelly, screaming into the phone from his Chicago home as he explains his go-to Super Bowl dish (jalapeños included) the day after the big game. “People knock it,” he says. “But every year they’re the hit of the party, because that shit tastes so good.”

Kelly is understandably enthusiastic about snacking, but he’s also excited to talk about the current status of his beloved pop-punk trio the Lawrence Arms (rounded out by guitarist/vocalist Chris McCaughan and drummer Neil Hennessy) and their first album in eight years, Metropole. Also the band’s first for Epitaph, it’s an effort that mixes face-smashing, pit-brawl punk with introspective slow-burners whose lyrics still mine the lives of the down and out. But this time, these characters have a few more years under their belts. With a bit more white in the beard himself, Kelly talked with SPIN about the record’s genesis.

So you had a Super Bowl party last night?
No, it was our drummer, Neil Hennessy. It was a lot of fun. I just woke up in the middle of the night feeling like a piece of beef jerky from dehydration.

The Lawrence Arms are about to headline a big tour. Is that something you have to worry about on the road now, as you are getting a bit older? Drinking and partying?
I mean, I’ve been known to have a brandy or two before the show. [Laughs.] Here’s the thing: It’s not so much that I’m older, because I am, I’m way far away from 23. But the thing is that people actually like our band now. People want to see a show, so there’s no room for piss-drunk dudes standing around onstage for an hour — that’s totally lame. As much fun as walking on the wild side or whatever is, there’s a time and place for it. It’s more about playing the songs really well and then, sure, go out a bit afterwards.

Was creating a new album spearheaded by one member, or was it more of a collective decision?
Well, there was no “We’re getting the band back together!” moment or something like that. This band has been a part of our identities for so long, and there’s been idle chatter between the three of us, so it was common knowledge that we felt like we should do something. Chris and I started writing songs that felt like the Lawrence Arms songs, so we started trading those, and it inspired us. The first thought was we would put out an EP and record some covers, maybe make a ten-inch. Then we all started hearing the songs together, and it was on. There was a little blood in the water then, and the next thing you know, we’re sitting on a group of songs we’re all very proud of.

Were you not finding your solo work as fulfilling as making music with the Lawrence Arms?
I love to construct a record by myself, but Chris and I have been best friends for 27 years, and Neil’s been my best friend for 19 years. There’s something in the DNA of my creativity that these guys are just ingrained in there. I hope I’m just as a big a part of their creative DNA in a similar way, for better or worse. We’ve been a band for 15 years, and it’s still all the original members. There’s a reason for that.

You’ve said Metropole is loosely based on the structure of something like an OutKast album. How did you guys go about making that decision?
Well, all of us are huge fans of Aquemini and also tons of hip-hop from the ’90s. That stuff was such a lifeblood for us and continues to be. I love hip-hop albums that have a longform narrative. It can be funny and goofy, but then get extremely dark at the drop of a hat, and gelling those things together is something hip-hop has done so well, to weave into the fabric of that culture to the point that nobody cares if there’s a joke song then a dark song. There’s interludes and diversions, but it’s a more holistic way of looking at things.

It was our idea to kind of take those themes and also do a back-and-forth thing with Chris and my vocals — finish each other’s sentences, sort of like a hip-hop album from ’89 to ’91. There’s just the fact that we’re old white guys, so it obviously won’t sound the same, but we liked that approach for vocal delivery. It won’t be as recognizable, but the genesis is there, and I think it’s legit.

There’s also interludes of lo-fi-recorded conversations and instrumentation. Where did those come from?
Originally, Chris and I were going to go out and interview each other at bars, restaurants, and just talking on the street in an urban environment. We had planned to weave the conversation through the whole album like a Linklater film or something. What we found was that that takes a lot of fucking time between recording, especially when it’s unscripted. There was just a lot of “Uhhh uhhhh” kind of shit going on, and it didn’t really work. We noticed that when we listened to the interviews that other things we heard in our recordings, like a speaker blast or something, were more evocative than the shit we were saying. I was on vacation with my family in Italy, and there was a guy playing a grand piano in the middle of a street [found on “Seventeener (17th and 37th)”], stuff like that. So we started recording things like that and mixing it into the record. The interludes are all found sound.

Was there anything that didn’t make the cut that you found equally compelling?
Some of the conversation we had was interesting but not immediately evocative. The lines that did make it are on the song “Metropole.” At the beginning, you can hear Chris and I talking, but there’s a guitar playing over it, and then Chris got one line of conversation in at the end of the song where he says, “Do you ever get the feeling that none of this really matters, and we’re all just doomed?” We ended up cherry-picking the best ones.

Was that a bummer for you, that conversationally, you and your best friend couldn’t accomplish what you had set out to?
Not at all. I think it turned out better, because I think the conversations we were having were a bit half-baked, because we just talked a bunch of shit that’d be interesting to us as we walked around different cities. In retrospect, it was maybe a little heavy-handed, but I think what we got was much more nuanced and, ultimately, cooler.