According to nephew, Moz doc will run in 47 U.S. theaters 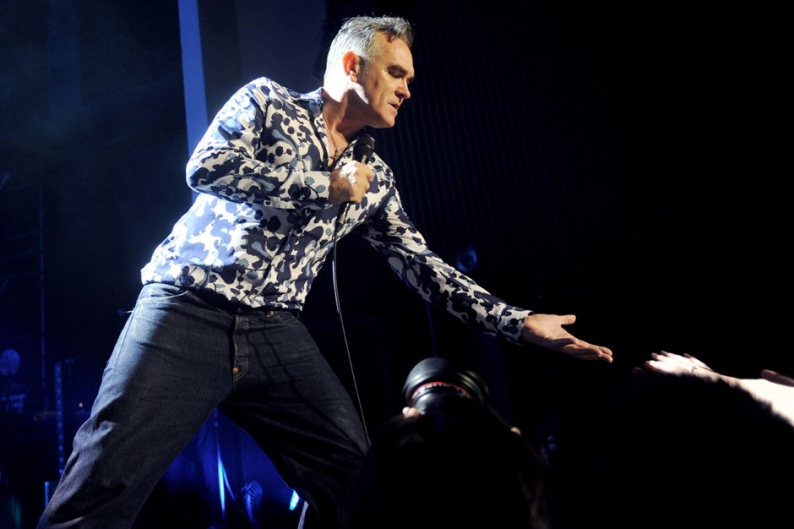 Morrissey might be headed to an IMAX theater near you. Earlier this year, it was confirmed (via Pitchfork) that Moz’s March 2 performance at the Hollywood High School auditorium in Los Angeles will be released as a concert film on DVD. Now, Slicing Up Eyeballs reports that the movie will hit IMAX 3D screens across the U.S.

Sam Esty Rayner, professional photographer and Morrissey’s nephew, broke the news on Tuesday night when he reposted photos taken during the L.A. gig on Facebook with the following message: “So the film of the Morrissey show at The Hollywood High School will be shown at 47 cinema across the United States of America, you lucky bastards. Available in IMAX 3D.”

That’s good news for the droves of fans who missed out on the English crooner’s recent U.S. tour, which was canceled due to persistent health problems. Nothing official regarding the film’s DVD or theatrical release has been announced yet, but the flick was mentioned in the spring 2013 catalog from Eagle Vision, the TV division of Eagle Rock Entertainment.

Meanwhile, the former Smiths frontman will soon get back on the road for a tour of South America. Scroll down to watch Morrissey play “The Boy With the Thorn in His Side” (filmed at the Hollywood High show by Rayner), followed by a full set list and upcoming live dates.

?”Alma Matters”
?”Ouija Board, Ouija Board”
“Irish Blood, English Heart”
“You Have Killed Me”
“November Spawned a Monster”
“Maladjusted”
“You’re the One for Me, Fatty”
?”Still Ill”
?”People Are the Same Everywhere”
“Speedway”
“That Joke Isn’t Funny Anymore”
“To Give (the Reason I Live)”
?”Meat Is Murder”
?”Please, Please, Please Let Me Get What I Want”
“Action Is My Middle Name”
“Everyday Is Like Sunday”
“I’m Throwing My Arms Around Paris”
“Let Me Kiss You”
“The Boy With the Thorn in His Side”