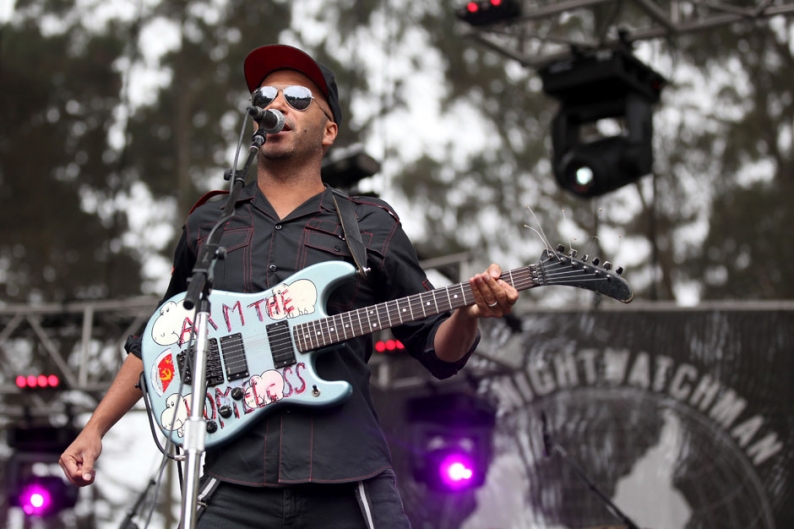 Ever defiant political rockers Rage Against the Machine have taken yet another hardline stance: unlike recently reunited contemporaries Soundgarden and Nine Inch Nails (or forebears Black Sabbath), the 1990s rap-metal band won’t reunite for a new album, guitarist Tom Morello told Billboard. RATM will reissue their 1992 debut for the 20th anniversary Rage Against the Machine – XX box set on November 27, but the group say they have “no plans beyond” that release.

“We’re really psyched to be putting this out for the fans,” Morello said. “We are blessed with having perhaps the most passionate fans to ever listen to a bootlegged recording or mosh at a show, so I want to really give them a motherlode of Rage Against the Machine history, past and present.”

The quote sits in stark contrast with bassist Tim Commerford’s recent tease that a follow-up to 2000’s Renegades might be in the works. Rage disbanded in 2000, but since 2007, the Los Angeles foursome have only reconvened for irregular live outings, including a headlining gig at 2011’s L.A. Rising festival and a turbulent set at Lollapalooza in 2008.

The upcoming reissue will be available in three different formats: 1) a CD with three bonus live tracks; 2) two CDs (the second consisting of album demos) and a bonus DVD featuring live footage; and 3) a box set complete with both CDs, two DVDs, a vinyl version of the LP, a two-sided poster, and a 40-page booklet with liner notes penned by Chuck D.

“It doesn’t feel like 20 years, but at the same time it’s sobering that it is,” Morello said. “There’s no crystal ball that we could’ve looked into when we were writing these songs in 1991 that would have told us we’d be talking about this record over two decades later. And I will say that 20 years later we’re able to take pride in the fact that in the history of rock music there has never been a more popular band with as radical politics as Rage Against The Machine, nor has there been a band with more radical politics than Rage Against The Machine that has been as popular. That is the lasting testament to the first shot fired by this album and how it continues to resonate with rebels around the world.”