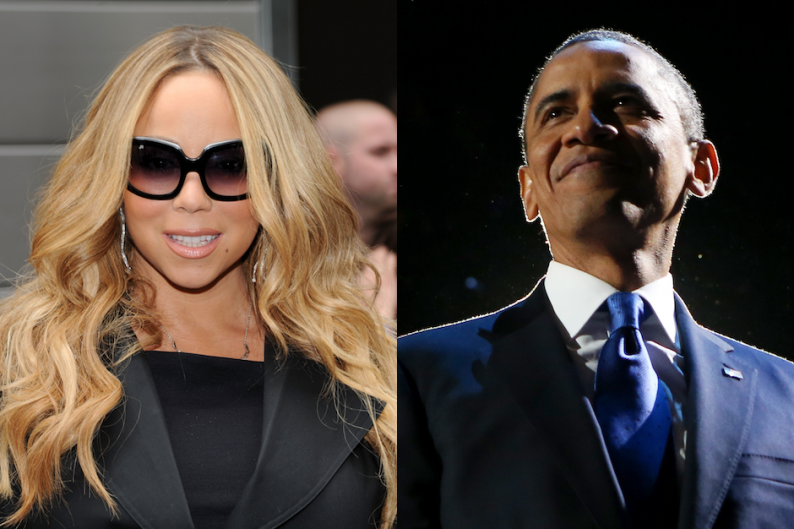 An election season rife with pop-music crossover moments is also, of course, ripe for election-themed music. With everything going on in America and abroad, President Barack Obama was asked at one point during the campaign to pick sides between supposedly feuding American Idol judges Mariah Carey and Nicki Minaj. Obama chose Mimi, calling the platinum-voiced pop diva “a wonderful lady,” so the least Mariah could do in return was record an uplifting song correctly predicting his reelection.

“Bring It on Home” is a swaying, piano-based song that would’ve fit in seamlessly with Carey’s ’90s material, and it amply indulges her awe-inspiring vocal range. Carey originally performed the song live at an Obama fundraiser over the summer; this version begins and ends with applause, so it might be related. In any event, the singer also tweeted her congratulations to the whole Obama family.

Bob Dylan might’ve been busy figuring out Facebook, but Carey wasn’t the only performer to unveil an Obama tribute song. Young Jeezy, who four years ago released the majestically nonchalant Obama ode “My President Is Black,” returned with the older, more hardened “We Done It Again.” Slighly recalling Lil Wayne’s “A Milli” if its vocal sample were allowed to spread out over cinematic keyboard chord changes, the Snowman blasts Romney, invokes Trayvon Martin, and declares, “It’s us against the world, we playin’ to win.” The Iwo Jima-based cover art gives you an idea of what level of over-the-topness he’s reaching here, but it’s still worth a listen if you’re celebrating today.

Mimi and Jeezy probably won’t have the last word in Obama reelection songs. The Black Eyed Peas’ will.i.am, who released the inspirational “It’s a New Day” four years ago, revealed last night via Twitter that he plans to release “another victory song” next week. And it’s certainly possible that Madonna, who last night turned her Pittsbugh concert into an Obama victory party (per the Pittsburgh Post-Gazette), might want to get out ahead of rival Lady Gaga in the Obama-homage sweepstakes.

Totally understandable if breakout Korean rapper Psy wants to stay out of American politics, but there’s an opening for the “Gangnam Style” hitmaker here, as well. As Rolling Stone points out, Obama said in an interview yesterday with New Hampshire radio station WZID-FM that he suspect his presidential limbs are capable of Psy’s notorious horse dance. “I just saw the that video for the first time, and I think I can do that move,” Obama said.

Then again, maybe Psy shouldn’t get his hopes up for a publicly “Gangnam Style” POTUS. “I’m not sure that the inauguration ball is the appropriate time to break that out,” Obama continued, then proferred another option. “You know, maybe do it privately for Michelle.” Bring it on home, Mr. President.