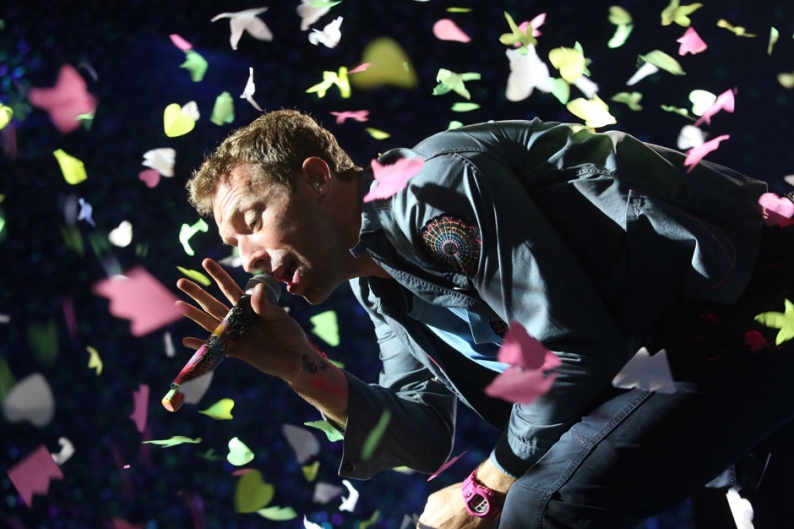 Coldplay continue the marketing blitz for Live 2012, the band’s upcoming concert film/live album combo package, with the release of Mylo Xyloto Live, an interactive eBook, due November 19. Described on Apple’s iBookstore as “an in-depth and interactive audio-visual companion piece to Live 2012,” the electronic title features hundreds of exclusive photographs and videos, a gallery of Chris Martin’s studio journal, and interviews with Coldplay, the band’s touring crew, and supporting acts from the tour behind 2011’s Mylo Xyloto.

Mylo Xyloto Live also boasts the entire Coldplay discography, hand-written lyrics from the album with audio clips, and highlights from the Live 2012 film, which airs on EPIX, EpixHD.com, and EPIX apps on November 17 at 8 p.m. EST, a few days before the DVD’s North American release on November 20. Selected movie theaters around the world will treat fans to an early screening of the movie’s multicolored stage show for one night only, on November 13. Tickets for the sneak peek went on sale globally on October 29.

The victory lap doesn’t stop there. Coldplay have a six-part comic book series on the way in early 2013, and are selling the graffiti-covered wall from Mylo Xyloto’s cover to benefit Kids Company, a charity that aids at-risk youth in the U.K. The wall, as well as three other original paintings by the band (done with the help of street artist Paris) will be exhibited in London from November 29 to December 2.

Mylo Xyloto Live has an expected release date of November 19, but can be pre-ordered for $7.99 from the iTunes store. The 170-page eBook, which was created and designed especially for the iBookstore, will be available for download on the iPhone, iPad, iPod Touch through iBooks, and on computers through iTunes.

See the official trailer for Live 2012 below.