Queen of Pop kicks off the U.S. leg of her 'MDNA' tour tonight in Philadelphia 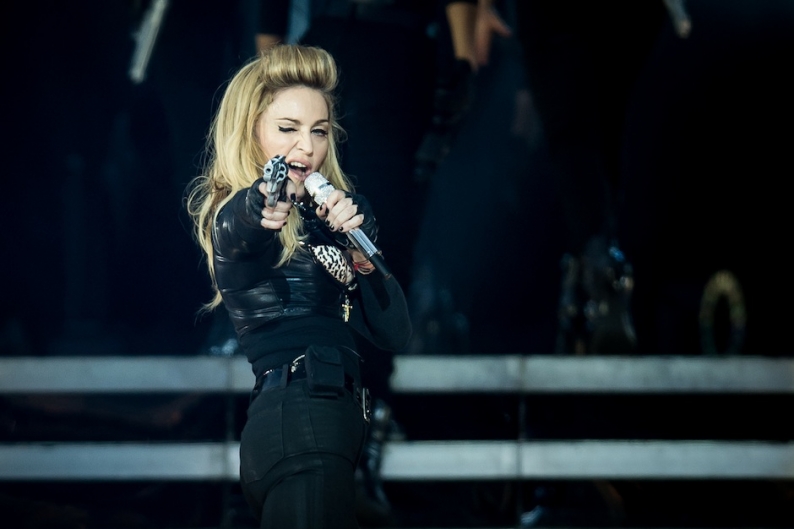 A dozen studio albums and roughly three decades into her career, Madonna still hardly goes a day without generating some scandalized headline or another. Just yesterday, she apologized for skipping the Australian leg of her tour behind newest full-length MDNA. But she might have been apologizing if she’d visited, anyway: The tour so far has already involved linking a French politician to neo-Nazis, mocking Lady Gaga, and exposing a nipple. There’s also a public feud with Elton John that’s too tedious to discuss any further.

As the Material Girl gets set to launch the U.S. leg of her tour tonight in Philadelphia, she’s somewhat preemptively addressing potential complaints about the show’s use of fake guns. “It’s true there is a lot of violence in the beginning of the show and sometimes the use of fake guns — but they are used as metaphors,” Madonna says in a free-associative, poem-like missive posted to her website. “I do not condone violence or the use of guns.” In other words, that show you’re about go to see? It’s just a show.

Sure enough, Madonna has already drawn criticism for the gunplay in her MDNA sets. After she defied local authorities by going ahead with the fake gun use in an Edinburgh, Scotland show held within 36 hours of the tragic Colorado movie-theater killings, a spokeswoman for Mothers Against Guns told Scotland’s Daily Record: “Madonna and her dancers using replica guns was always in bad taste but given what happened in Colorado it is even worse. She should know better.” But still, most of the criticism appears to have come from, well, bloggers and critics. A live review in the Hollywood Reporter complained about “excessive gun-toting,” and a Perez Hilton headline warned, “Madonna’s MDNA Tour Might Anger Anti-Gun Activists.” Self-fulfilling prophesy?

Maybe those anti-gun activists will have noticed that outside the world of popular entertainment, the two major U.S. political parties are hunkering down for their respective conventions, and neither one will probably say much about limiting murderers’ access to weapons designed to mow down row after row of human beings without reloading. As New York City Mayor Michael Bloomberg said last week in the aftermath of the Empire State Building shootings, “There’s an awful lot of guns out there.” For once, Madonna might be the smoke and not the fire.