One pill makes you larger, and one pill makes you small. And the pill Madonna wants you to associate with her 12th studio album, MDNA — the imaginary, Ecstasy-like drug that Beverly Hills, 90210 adorably called “Euphoria” — will make you feel just that… until it doesn’t. The comedown is a teeth-gnashing, serotonin-sloughing, damn-the-daylight free-fall. It sucks. So does going through an ugly public divorce, seeing your efforts to build schools in Africa go to shit, and watching pop stars half your age strip-mine your career for inspiration.

Staring down the unique triad of crapitude that’s been her reality since releasing 2008’s Hard Candy and finishing its record-breaking Sticky & Sweet support tour, Madonna kicks off MDNA guzzling from the Fountain of Youth, cooing about how “girls, they just wanna have some fun” over a four-on-the-floor Eurodisco tsunami from Italian electro-house maestro Benny Benassi. For five additional tracks, Madonna twirls around the club with her face in the bottom of a glass, and it’s all good. She bops back to the ’60s, fashioning herself a Nancy Sinatra-esque revenge fantasy on thumper “Gang Bang,” and partying with M.I.A. and Nicki Minaj on bouncy hip-swiveler “Give Me All Your Luvin’.” She channels the gooey pleasure of cranking up the radio and hitting the road on the playful, Martin Solveig-produced “Turn Up the Radio.” She tumbles well past the rabbit hole on swirling synth concoction “I’m Addicted.” And she bobs and weaves over crunchy banger “Some Girls,” helmed by longtime collaborator William Orbit and Robyn’s secret weapon Klas Åhlund.

Then the real dance-floor confessions arrive. MDNA isn’t Madonna’s true breakup album — she did most of her emotional heavy lifting on Hard Candy‘s “Miles Away” and “She’s Not Me,” as her relationship with British filmmaker Guy Ritchie fizzled before our eyes. But the second half of this album is far more earnest; and in related news, far less fun. She breaks out her cache of clichés to gush about a new man on “Superstar,” and fills “Love Spent” with painful comparisons between marriage and money. She goes into Evita mode for “Masterpiece,” the orchestrated ballad that appeared in her feature-length directorial debut, W.E. She slips into an “American Life” flashback for “I Don’t Give A,” a breathless bitch-fest about her hectic life, only rescued by another Minaj cameo and some glitchy production work by Solveig. 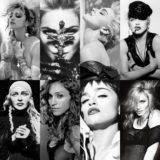 But if there’s one producer who knows how to pluck Madonna’s heartstrings, it’s Ray of Light‘s Orbit. He lifts up this sagging second half with “I’m a Sinner,” a mod, “Beautiful Stranger”-like romp that combines two of Madonna’s most reliable tropes — Catholic guilt and hedonistic glee — and gives her a pretty outlet for her woe on mournful closer “Falling Free.” Singing in a vulnerable, resigned soprano, Madonna sinks into the tune’s soothingly repetitive melody like a warm bath and admits there’s a chink in her armor: “Deep and pure our hearts align / And then I’m free, I’m free of mine.”

Beneath the fishnets and chiseled arms, Madonna is a 53-year-old divorced mother of four, and despite what you think you saw in her “Girl Gone Wild” video, this is the most naked she’s been in years. Love, like club anthems, public opinion, and luck, does cycle through your system like a drug. Whatever Madonna was on has worn off by now, but a star this ferociously focused on what’s next can always pop another.