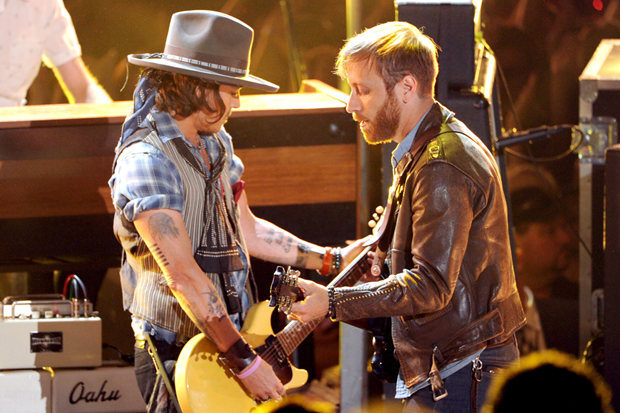 Sorry, Barack Obama, the music industry may have a new savior and his name is Johnny Depp. The week after he donned a Keith Richards-like wardrobe and picked up a guitar to join the Black Keys onstage at the MTV Movie Awards, Billboard reports sales of that band’s latest album El Camino saw an 18 percent sales rise, which equates to about 10,000 copies. Moreover, the two songs Depp played on — “Gold on the Ceiling” and “Lonely Boy” — each sold 30 percent and 19 percent more than the previous week.

And it doesn’t end there. “The Black Keys performance with Johnny Depp was the biggest musical moment of the night and it shows in our strong post-show sales,” Livia Tortella, co-president/COO of Warner Bros. Records, told Billboard. “Not only did ‘Gold on the Ceiling’ naturally benefit from its performance, but we also saw a healthy spike across some of the band’s prior albums and singles.” There’s a reason they forced him to star in all those Pirates of the Caribbean sequels, folks.

But while the appearance of Mr. Scissorhands, who also received MTV’s Generation Award, helped garner the 3 million viewers who watched the Russell Brand-hosted ceremony, other artists benefited from sales increases after the show, too. Wiz Khalifa, who performed “Work Hard, Play Hard,” saw his song sell 37 percent more downloads than the previous week, and fun., who enlisted Janelle Monáe at the show to help them remind everyone how young they were, benefited from a 33 percent jump in album sales (even though their single sales are slipping).