There are squid, goat masks, hula girl motifs hiding in there 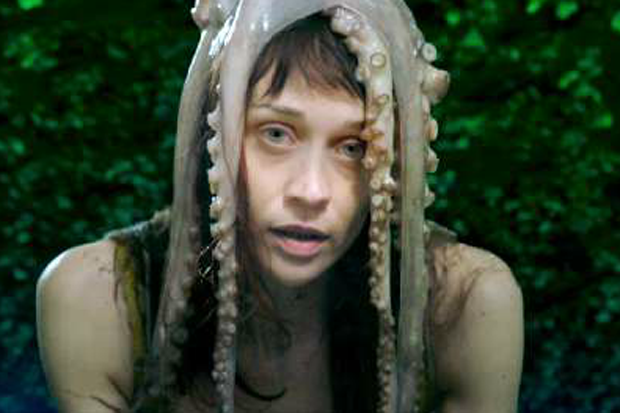 In some of the lyrics to the “new track,” as Fiona Apple so derisively referred to “Every Single Night,” in our recent interview with the singer-songwriter, she soulfully yowls, “Every single night’s a fight with my brain.” Now she is showing us just what those lyrics mean with an surrealistic new video for the song, helmed by quirky director Joseph Cahill. Considering Apple has titled her new album When the Idler Wheel is Wiser Than the Driver of the Screw and Whipping Chords Will Serve You More Than Ropes Will Ever Do (which you can stream at NPR right now), and the fact that Cahill’s Vimeo bio boasts of his recent short film about “fear and crêpes,” their pairing sounds like a fantastical match made in heaven.

The imagery in the Apple video is dreamlike and vivid, as she sings with a squid on her head, lies down next to a man wearing a goat’s head mask, floats on marionette strings over an alligator, ignores a giant snail headed toward the Eiffel Tower, cleans a floor with a toy hula girl and much, much more. As with her past videos like “Criminal” and “O’ Sailor,” Apple remains wide-eyed and passive as the world goes crazy around her, and that just makes the whole thing all the more unsettling.

So, without further ado, the fight inside Fiona’s brain, thanks to Sundance Channel: