Eminem Clowns His Wealth in Slaughterhouse’s ‘My Life’ Video

Slim Shady doesn't appear on the track, but he goes for laughs in new clip 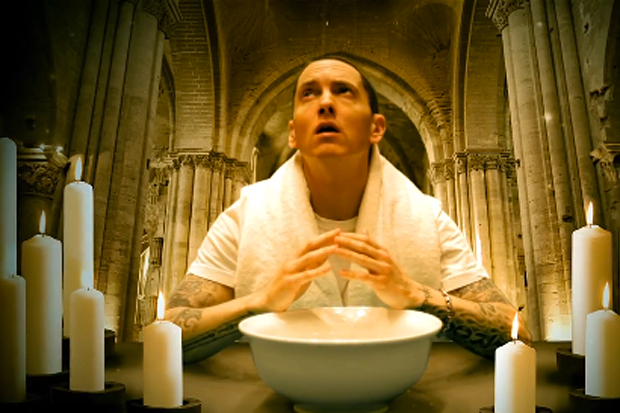 The gap between the opulence of much chart-friendly hip-hop and ongoing economic stagnation for much of the world has rarely been stretched to such absurd extremes. Eminem spits not a single bar on his Shady label signees Slaughterhouse’s new “My Life,” which features an echoey hook belted by Cee Lo Green, but the real Slim Shady still stars in an extended, Lifestyles of the Rich and Famous-spoofing skit that opens the song’s new video (via MTV). Directed by L.A. studio Syndrome, whose previous work runs the gamut from Alicia Keys to Ke$ha, the clip amusingly shows Eminem washing his face with other rappers’ tears, dining with his pet dinosaurs, and, of course, sitting in a literal throne.

If all this over-the-top one-percenter imagery has you thinking Shady might be compensating for something that’s missing from the song, well, you’re not wrong. The Slaughterhouse team of Roye Da 5’9″, Joell Ortiz, Joe Budden, and Crooked I has racks on racks of lyrical talent, but Em’s entertaining appearance only drives home the blandness of “My Life” itself. There’s not much to fault about the track’s dextrous verses, which, of course, brag about the rappers’ supposedly lavish lifestyles, but there’s not much worth writing Robin Leach about, either. Cee Lo shows up in a pilot’s uniform — ostensibly because in this song, “jets fly private” — to roar about how this is, yes, “my life.” Maybe he’s cray?

Eminem didn’t get so wealthy by being forgettable, however, and this lustrously lackluster clip might help explain why his hip-hop supergroup’s upcoming Welcome to: Our House already missed a previously reported June release date. Better off watching Slaughterhouse’s ferocious BET Hip-Hop Awards cypher from last October instead. People tend not to eat the rich so long as the rich sound hungry.