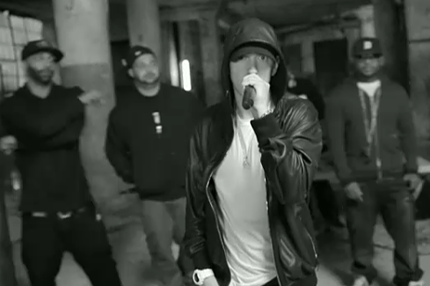 Chris Brown, Lil Wayne, and Nicki Minaj picked up the most trophies at the BET Hip Hop Awards, taped in Atlanta on October 1, which finally aired last night. But the real winners were the rappers who performed the evening’s best cyphers. It was hard to top Eminem, looking more like a hungry — and outrageously funny — up-and-comer than the often-tiresome festival headliner of the past year. In a shaky black-and-white video, Em rhymes over East Flatbush Project’s “Tried by 12″, joined by a rapid-tongued Yelawolf, gruffly star-mocking Joe Budden, fire-breathing Crooked I, hilariously self-deprecating Joell Ortiz, and slyly flirtatious Royce Da 5’9″. “Imma rap til I’m fossil fuel,” Shady seethes. So long as he does it like this, that’s great news, as is up-and-coming producer Araabmuzik’s recent revelation on SOHH (via FACT) that he’s working on new music with the Shady Records CEO, among other hip-hop heavy-hitters.

Check out the “Shady 2.0 Cypher,” along with a few others while perusing the list of winners below. For more BET Hip Hop Awards videos, including live performances by Wiz Khalifa, Young Jeezy, T.I., DMX, and Swizz Beatz, hit up the show’s official site.

Lyricist of the Year:
Lil Wayne

Producer of the Year:
Lex Luger

MVP of the Year:
Nicki Minaj

Track of the Year:
Black and Yellow – Produced by Stargate (Wiz Khalifa)

DJ of the Year:
DJ Khaled

Rookie of the Year:
Wiz Khalifa

Hustler of the Year:
Jay-Z