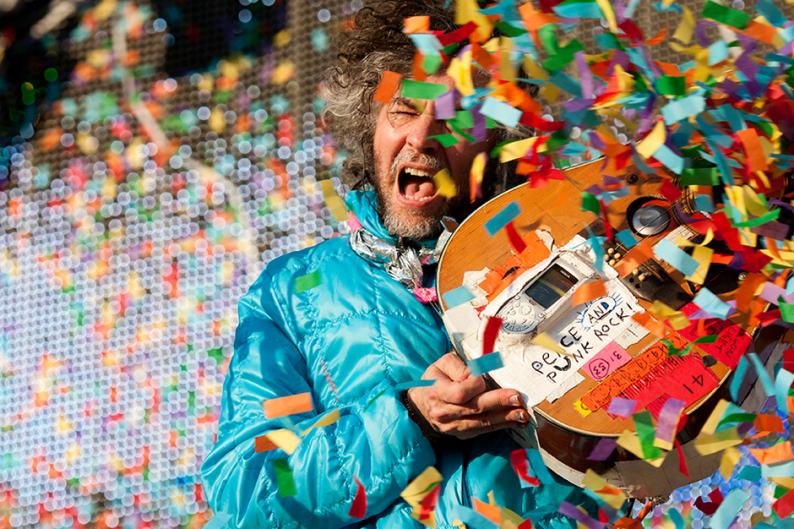 When it comes to fight songs, college sports almost always trump the pros. A quarter-century after “The Super Bowl Shuffle,” however, Jim Jones’ “We Fly High,” Wiz Khalifa’s “Black and Yellow,” and even Future’s “Tony Montana” have emerged as pro teams’ unofficial theme songs. Over the weekend, Flaming Lips’ Wayne Coyne unveiled his band’s musical tribute to the NBA’s Oklahoma City Thunder, and here’s hoping the team takes the hint.

With a Go! Team-like “Thunder Up!” chant and fan-submitted lyrics gathered via Twitter, “Thunder Up: Racing for the Prize” is a weird, trippy little jock jam, but a highly serviceable jock jam nonetheless. As a re-working of the Oklahoma City psych-rockers original “Race for the Prize,” from 1999’s The Soft Bulletin, the song also offers a separate reason for hometown pride: Whether tweeting nude photos, competing with Jay-Z for world records, or selling vinyl records embedded with the blood of fellow artists, the Lips are truly without peer.

And though Coyne & co.’s latest might not appeal to record snobs as much as their non-sports-related output (understandably)! it’s a vast improvement upon pro sports fights songs like the Miami Heats’ “Can You Feel the Heat,” the San Diego Chargers’ “San Diego Super Chargers,” or the San Francisco 49ers’ “We’re the 49ers” — although you should totally listen to all of those, because they’re hilarious. Have you heard the Steeler Polka? You should! The Cleveland Cavaliers’ funky “Come on Cavs” had a certain charm, though — to the list of gripes against LeBron James, maybe we should add “Philistine.”

Anyway, listen to “Thunder Up: Racing for the Prize” and watch a making-of video below. We’re all Thunder fans now: