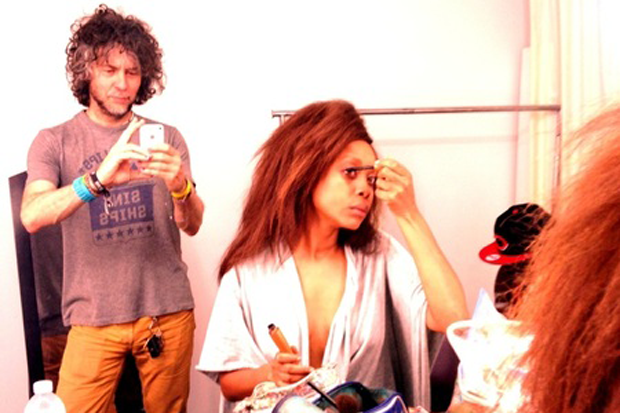 It’s no news that Wayne Coyne is evolving into a hilarious mixture of “spiritual, astral-traveling, psychedelic shaman” and “dirty old man,” constantly filming music videos in the buff and blasting nude Twitpics of his wife. Well this week, he and Erykah Badu are busy filming the video for their Heady Fwends highlight, a cover of “The First Time Ever I Saw Your Face,” a track made famous by Roberta Flack (uh, and Blowfly). In the process, Badu — or someone who looks a lot like her — has apparently stumbled into @waynecoyne’s steady stream of Hardcore Coyneography.

In a series of Coyne tweets, you can spot Badu bathing in glitter and covered in Carrie-style blood, often with what looks like full view of her Baduizms. We’d cry invasion of privacy, but Badu has been going starkers since 2010’s “Window Seat” video, which was denounced by no one less than the Mayor of Dallas, Texas, himself. Check out the photos, and wait for the video to see if this “tub full of fake semen makes a special guest appearance!

Update: Badu has alerted the world that she is not the nude (this time). “Those nude photos posted by Wayne (flaming lips) are of the beautiful Nayrok my lil sister and bestee,” she tweeted last night. “We do look alike.Video looks cosmic.” And nude!