And Madonna's playing the Super Bowl! 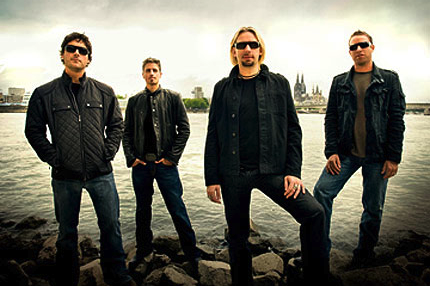 Music collided with sports over the weekend, and not just with official confirmation of Madonna as next year’s Super Bowl headliner.

Baseball season is long over, but that just means the players have more time to go to rock concerts. After apparently seeing a Foo Fighters show, Atlanta Braves pitcher Peter Moylan committed the rare feat of making Nickelback look clever.

As Deadspin points out, Moylan tweeted on Friday: “Note to @nickelback please attend a @foofighters concert. That’s how’s it should be done chad.” Fair enough, right? But then Nickelback tweeted back: “”@PeterMoylan Foos are killer for sure. We’re doing just fine too thanks. ? for you Pete, is watching Kimbrel better from the bench or on TV?” (Fellow Braves pitcher Craig Kimbrel was this year’s National League Rookie of the Year.) And that’s how you get burned by Nickelback.

Over in the National Football League, the San Francisco 49ers continue to surprise everyone and win lots of games. On Sunday, the Niners clinched their division with a 26-point victory over the St. Louis Rams. Also: They danced a lot. As the great San Francisco Chronicle sports columnist Scott Ostler recounts, “The 49ers looked like Glee meets West Side Story on the gridiron.”

The special-teams unit reportedly asked the team’s publicity chief to have “Racks” guest rapper Future’s Drake-assisted song “Tony Montana” play over Candlestick Park’s public-address system before each 49ers kickoff. “There are a few guys out there (who) like to dance before the kickoff every week,” fullback Bruce Miller told Ostler. “This week, we got a few more of the guys involved.”

Scarface director Oliver Stone reportedly named the character of Tony Montana after the legendary 49ers quarterback Joe Montana, so in a weird way, everything has come full circle. Now Future just needs to record a song where he says Joe’s name 52 times.