The Cult’s Ian Astbury on Girl Power, ‘Love,’ And Karma

Time isn’t exactly a linear construct for the Cult’s Ian Astbury. The crooning frontman made his name during hard rock’s ’80s halcyon days, but his spiritual roots reach back to the mystical ’60s (it wasn’t exactly a shocker in 2002 when the remaining members of the Doors asked Astbury to pull on the Lizard King’s leather pants), and his band is set to release the intense Choice of Weapon (Cooking Vinyl), their first new studio album in five years, on May 22. Fittingly, the headscarf-loving Englishman, who turns 50 the week before Weapon’s release, covers a lot of territory as he offers his alternately shamanistic and common-sense guidelines for enlightenment.

I’d rather take my directions from a woman. I came from a very strong matriarchal background — my mom, seven sisters. Maybe it’s having all that feminine energy and being interested in feminine artists like David Bowie that made me much more interested in the poetic vein of expression. You gotta ask yourselves, “Who are these guys pontificating about this and that? Who are the government and leaders?” It’s all men. I’d like to see more women up front.

Forget about yourself. Think about how your actions affect everybody else. When you came through punk rock and postmodern music, they pulled the ladder up on us. That’s one of the reasons we railed against the older generation so much, because they went, “We’re gonna keep all the cake for ourselves.” With all respect, I don’t know too many artists from that period who were associated with altruism and political activism apart from the obvious Joni Mitchells and Neil Youngs. But a lot of people were definitely shoving as much stuff as they could get in their nose, in their pockets, grabbing the hottest off the shelves for themselves. When I was meeting people like Jagger and Clapton for the first time, they were more interested in hitting on our girlfriends than giving us any advice about how to be a young man. 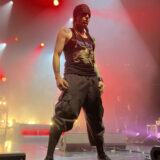 I remember learning to sit. In my own dark night of the soul, I had an encounter with a Tibetan monk in New York, and I escorted him to where he was staying and had this wonderful discourse with him. I was saying, “How do I get through this period in my life?” And he goes, “Accept your karma. Accept the events that have got you to this place.” I’m like, “That’s so hard.” And he goes, “You have to accept it. You can’t change it. The moment’s gone. Where you’re at in this present moment is infinite possibility, so accept those events.” I said, “How do you do that?” And he said, “Sit. Learn to look inward. Learn to sit.”

Creating [1985’s hit album] Love, we were trying to make a flower instead of a barbed-wire fence. That took a real presence to do that. The U.K. culture was very cynical. You’d have to live through it to understand the reference points. It’s amazing that Black Sabbath is playing Lollapalooza this year. They came from postwar Britain. They came out of bombed-out buildings. They’re still pulling bombs out of the buildings in England. I was lucky. I got exposed to other cultures. The North American influence really pushed the optimistic button in me.

Fuckin’ smash the doors open of the libraries and steal the books that have got the dynamite in them. Get [Terence] McKenna, get Alan Watts, get [Allen] Ginsberg, get the great Buddhist teachers. Pema Chodron is still alive. She has incredible insight. She’s lived the Western life. She has grandchildren. She understands, but she’s an ordained Buddhist nun. If you have the opportunity to see her speak, do.

Learn about visual elements, forget about the aural elements. People say [adopts mock-reporter accent], “What do you say to young artists?” I say, “Get a fucking camera.” You should go away and spend 16 hours in your bedroom exploring your influences and mastering your instrument, but at some point, you’ve gotta have that tactile experience. What I’m saying now is get a camera, learn about visual elements, really look at visual elements and how they play a role in the culture. If you really wanna get your face out there, you gotta have something that captures people’s attention for those 15 seconds.

You don’t have to be a part of any particular system. You can create your own reality. The Cult, and me as an individual, we stepped out of the mainstream. Or at least I stepped away from that in the mid-’90s. I came back and revisited it, because I thought it somehow changed, or we changed enough to make a difference. But we really had to create our own environment. We had to be much more autonomous.

the Cult, Words of Wisdom