Also, they covered Woody Guthrie on iPads... with Jackson Browne 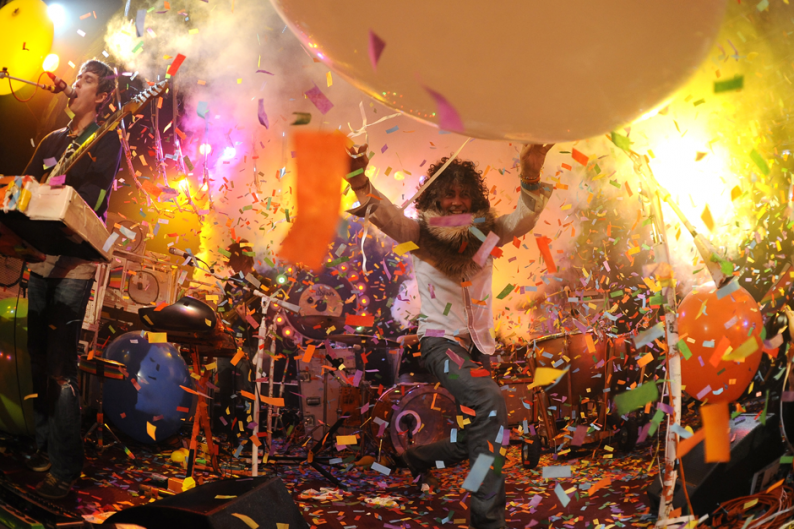 The Flaming Lips’ long-in-the-works musical is finally almost here. Yoshimi Battles the Pink Robots will premiere in November or December at the esteemed La Jolla Playhouse, the Los Angeles Times reports. As if San Diego didn’t sound appealing enough already at that time of year.

As previously reported, the musical will include songs from The Soft Bulletin and At War With the Mystics as well as 2002’s Yoshimi. The production is written and directed by Jersey Boys director Des McAnuff. The theater company’s website promises a “dazzling, multi-media experience,” and yes, the plot focuses on a young Japanese artist named Yoshimi who must do battle in an evil robot world.

The wide-eyed Oklahoma psych-rockers have been working on a theatrical treatment for Yoshimi at least since 2007, when The Social Network/West Wing writer Aaron Sorkin was reportedly involved. His name wasn’t included in the latest announcement. McAnuff, for his part, has won multiple Tony Awards, and he’ll be helming this production after stepping down as head of the Stratford Shakespeare Festival. (To realize or not to realize?)

In the meantime, the Flaming Lips have been up to their usual wackiness. As Consequence of Sound points out, Wayne Coyne and the gang played at a concert in Tulsa, Okla., this past weekend to help commemorate what would have been Woody Guthrie’s 100th birthday. They played a haunting rendition of Guthrie’s “Along in the Sun and Rain,” with everybody but Coyne using an iPad as their instrument. Oh yeah, and Jackson Browne was also there, strumming along and taking the lead vocal. Psych Explorations of the Future Heart caught it all on video. This evil robot land is your evil robot land: