Wayne Coyne says new music will be released via guitar effects pedal, cereal boxes, and an issue of Mad magazine. 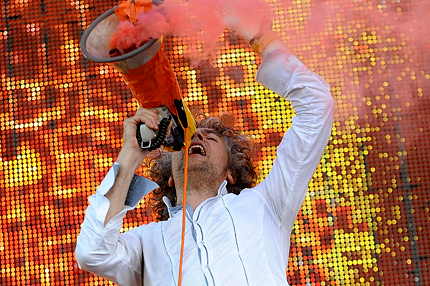 When SPIN caught up with Wayne Coyne in January, he hinted at the Flaming Lips’ plans to release new music at a rapid-fire clip for free online. The Oklahoma psych-rockers have amended their online-only release idea and, after talking about his plan to release a USB drive of music contained in a gummy skull last month, Coyne has now revealed the next batch of vessels for delivering new music.

In an interview with Billboard, Coyne says the Lips will include four new tunes on a guitar effects pedal, plus flexi-discs that will be distributed on the backs of cereal boxes and in an issue of Mad magazine. Coyne adds that the band hopes to collect all this music onto a longer album for release in early 2012 — and even that will be housed in an unconventional manner.

“We’ve had grandiose ideas of putting out a life-size, gummy version of myself, and in the heart would be this giant hard drive with all the music on it that you could just pull out,” he says. “We think, ‘Fuck, why not?’ I love those kinds of ideas.”

Coyne says the Flaming Lips’ ideas for getting out new music in unconventional formats is a result of the crumbling major label model, but the band’s home Warner Bros. has been supportive of their ideas. “Everybody’s in the same quagmire now: How do you release new music? What would be interesting?” he says. “It’s just by luck that we run into people that are willing to help us and… want to do something radical with us.”

In related news, Coyne says the Lips are in the pre-production phase of their years-in-the-works musical based on 2002’s “Yoshimi Battles the Pink Robots.” The group is working with Jersey Boys director Des McAnuff and the final product will include roughly 30 songs, including staged versions of material from The Soft Bulletin and At War with the Mystics. “It’s hokey and wonderful and poignant and powerful,” says Coyne. “It’s really become a perfect combination of my fantastical robot-world vision.”