The frontman says a collabo with Neon Indian, vinyl reissues of their catalog, and a mobile phone version of Zaireeka are in the works. 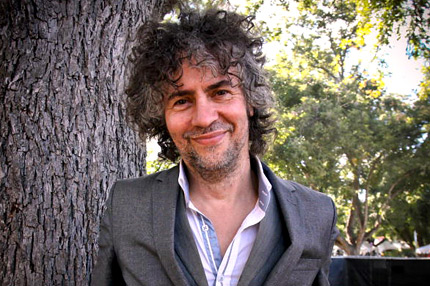 It’s a brand new year, so why shouldn’t the Flaming Lips give fans some new music in a whole new way? Taking a cue from Kanye West’s G.O.O.D. Friday series, the Lips plan to drop one track a month online. “Releasing a new record every two years is boring,” Coyne tells SPIN, adding that the group’s label Warner Bros. (where the Lips have re-upped their contract for 10 years) are supportive of the web-debut series. “If Kanye can do it, underground weirdos like us can do it.”

First up, the band is heading to New York to cut tracks with synth-pop artist Neon Indian and longtime producer Dave Fridmann, and they’re hoping to release the results on the fly. “We’re going to do two or three songs with him and that shit should be ready to go pretty quickly,” says Coyne, who posted a demo of a potential collaborative track earlier this week. “I have a couple of tunes that he’s heard and we’ll just do that shit and fix that up and fuck around together.”

Coyne adds that he’d love to do similar collaborations with Deerhoof and Ariel Pink’s Haunted Graffiti: “I think everybody would be up for doing something. But a lot of it comes down to us fitting into their schedules. I can always sneak in on their thing.”

The Flaming Lips also have “elaborate vinyl things” coming down the pike this year, including Heady Nuggs: The First 5 Warner Bros. Records, 1992-2002, which Coyne hopes to have out in time for Record Store Day, April 16.

And then there’s their unconventional reissue of the 1997 album Zaireeka, which was initially issued on four separate discs intended to be synched-up and played simultaneously. This time, they’re prepping the reissue for simultaneous plays on mobile phones (watch Coyne and Lips’ Steven Drozd demonstrate below). “We’re trying to get together as many people with phones to cram into a bathroom and play it,” says Coyne. “It’ll be a cool experience.” He says the reissue will be available within the next ten days.