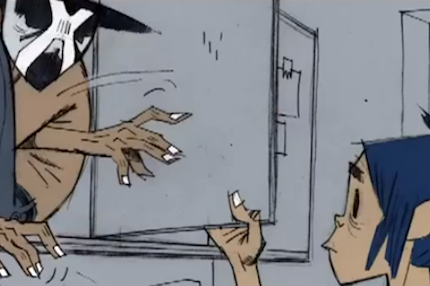 Let it never again be said that ripping songs from the radio died with the dawn of the MP3: this afternoon, DJ Zane Lowe of BBC’s Radio 1 dropped a rip of the long-awaited Converse track from Gorillaz, James Murphy, and Andre 3000, "DoYaThing," on Soundcloud (via Pitchfork).

It sounds like great timing for Gorillaz’ Damon Albarn: Fresh off Blur’s Outstanding Contribution to Music honor at the Brit Awards last night (coupled with the recent announcement of Blur’s headlining gig at the 2012 Summer Olympics’ "Best of British" show), he’s adopted a more optimistic timbre than his usually spaced-out, higher-than-a-kite vocals. Even Murphy turns up a happy falsetto for the choruses (can’t help but be reminded that his out-of-the-LCD-Soundsystem-ashes project, Special Disco Version, just announced their appearance at this summer’s Governor’s Ball). As predicted, Stacks’ fast-spitting verse essentially lays the rest of the song to waste. And we know Zane feels us when he asks repeatedly, “Can we get an OutKast album now?” over the track’s outtro, but … Seriously.

Hear "DoYaThing" at Listen Before You Buy. It’s out tomorrow as a free download via Converse.