Gorillaz, James Murphy, and Andre 3000: What the Hell Is Going On in This Clip?

The new making-of video clip has us scratching our heads... in anticipation 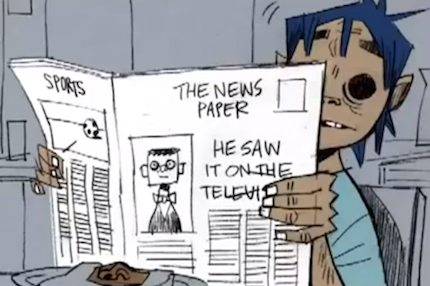 As we’ve reported previously, Gorillaz have been scheming with Andre 3000 and James Murphy to drop a track via Converse on February 23. As we expected, now they’re teasing us. Last night, Seattle alt rock station 107.7 The End (via the Daily Swarm) posted the "making-of" video for the track, called "DoYaThing," and though we’re familiar with Gorillaz artist Jamie Hewlett’s Gorillaz characters, we have absolutely no idea what is happening in this video, save that there is going to be one, eventually, to accompany the track.

What’s to be confused about? Something about a green-suited stand-in, a hole in the ceiling, no human face shots, an axe lodged in a wall and the words "I smash 2-D’s face in the wall" scrawled on, well, another wall — not exactly illuminating (albeit markedly Gorillaz-esque). Still, the video and the corresponding 30-second clip of the song have done their job: we’re counting down till that song, the aesthetic of which matches all three artists’ styles in equal measure, drops (eight days!).

What else have Gorillaz been up to lately? See:
• Gorillaz Announce Converse Song with Andre 3000 and James Murphy
• Gorillaz Team With Converse, Design a Shoe
• Gorillaz Release Greatest Hits
• Gorillaz Team Up with Snoop Dogg for Woozy Stoner Jam

Watch the video and/or listen to the clip by itself: