Gorillaz, James Murphy, and Andre 3000 Made a Song

'DoYaThing' drops via Converse on February 23 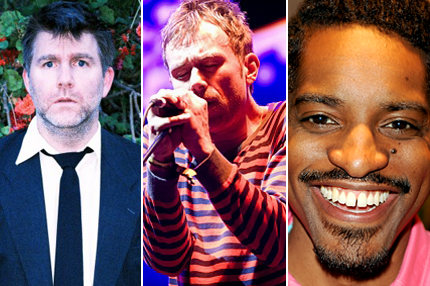 The long-speculated collaborative track for Converse that Gorillaz announced in November, finally has its missing pieces. The brainchild of Damon Albarn will share a credit with James Murphy and Andre 3000 on the sure-to-be ridiculously good song. “DoYaThing” drops February 23, and according to the Sun, who seem to have heard it, it’s quite Plastic Beach-y.

Speaking to EW, Albarn said the kind of “spontaneity” the three achieved was key. “I look for it all the time. It doesn’t always arrive on my doorstep, but it’s something I aspire to.”

Albarn-as-Gorillaz most recently collaborated with Snoop Dogg, who also appeared on the Gorillaz latest album, 2010’s Plastic Beach. Will the Murphy 3000 (see what we did there?) studio time spur more guest appearances? Will the (imaginary) video for “DoYaThing” featurea Muppets appearance and a new kale recipe? We can only be good… and pray.