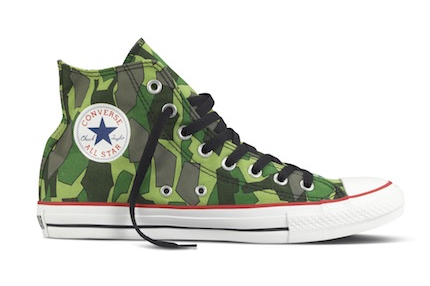 Gorillaz are teaming up with Converse for a new line of shoes, the company has announced. The animated hip-hop group’s co-founder Jamie Hewlett has designed a series of Gorillaz-themed prints for the Gorillaz Chuck Taylor All Star collection, which Converse plans to roll out in February 2012. The shoes will carry a suggested retail price of $60 and be available in four different styles.

There will be a musical element to the collaboration, too. Although full details will be announced later, Converse says Gorillaz will anchor the next new original song in the company’s “Three Artists. One Song” series, which recently included a collaboration between Matt & Kim, Soulja Boy, and Andrew W.K. The free track’s release will coincide with the launch of the Gorillaz sneakers.

To mark the occasion, Gorillaz and Converse are hosting festivities on December 1. That’s when the Gorillaz Sound System, a Gorillaz-endorsed audio-visual experience that includes music, live percussion, and projected visuals, will take place at the 100 Club in London. Ticket information will be available at www.converse.co.uk or www.gorillaz.com.

Gorillaz drummer Russel Hobbs seizes upon another meaning of the word “converse” to explain why the partnership makes sense. “We’ve been trading in ideas and conversing with one another for 10 whole years,” Hobbs says in a statement. “Plus, I’ve been wearing my Chuck Taylor’s since forever.” Gorillaz will release a new greatest-hits compilation, The Singles Collection, on November 29. Converse was bought in 2003 by Nike, whose name also has a cool double meaning.