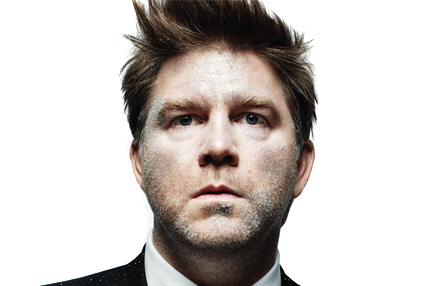 “Bitch, I’m James Murphy,” raps Das Racist member Kool A.D. on a track from his solo mixtape The Palm Wine Drinkard, which is Lou Reed-and-Metallica levels of batshit. Remember, this is the same hip-hop trio that, evidently parodying all the rap songs that repeat the names of mythic figures like Tony Montana and M.C. Hammer, hilariously compared themselves to “Michael Jackson.” Well, like SPIN did at Sundance, Pitchfork spoke with the actual James Murphy recently, and it turns out that, apropos of A.D.’s half-baked aperçu, the former LCD Soundsystem frontman can do pretty much whatever the fuck he wants these days.

For instance, in the 10 months since LCD played their final show at Madison Square Garden last April, Murphy hasn’t just been doing insane shit with no lesser talents than OutKast’s Andre 3000 and Blur/Gorillaz maestro Damon Albarn. He has also reportedly produced sessions with Yeah Yeah Yeahs, Klaxons, and Holy Ghost!. “I’m trying to do what I used to do, which is just spend a day in the studio with people I think are good,” Murphy told Pitchfork.

So let’s say you’re James Murphy. What else are you gonna do? Well, for another thing, potentially work with Arcade Fire, whom Murphy has previously said he would have liked to produce if not for what he now describes to Pitchfork as a “soul-crushing master plan” of tour, record album, rinse, repeat. Also on Murphy’s bucket list: Maybe launch “a store that sells stuff” in Brooklyn.

In the meantime, though, he’s mixing audio for the four-hour concert movie of LCD’s grand finale — not to be confused with the Sundance-screened narrative documentary Shut Up and Play the Hits. When you’re James Murphy, maybe this is how you do hits.