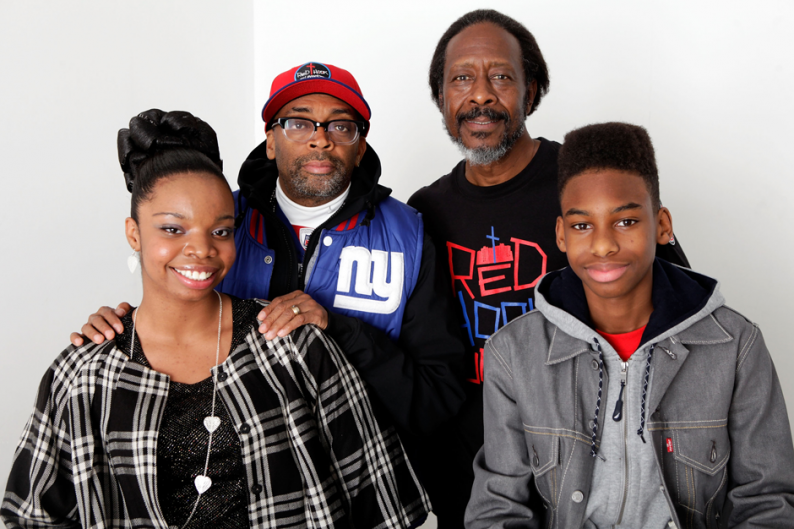 Spike Lee Discusses the Return of Mookie
Lee’s Red Hook Summer is the fifth installment in what the director refers to as the Brooklyn Chronicles, which arrives 17 years after his last (Clockers — the other three being (Crooklyn, She’s Gotta Have It, and Do the Right Thing). Summer is a long, sprawling narrative that tackles religion, gentrification, technology, abuse, community — too many things, probably, for one movie. The story follows Flik, a hipster kid from Atlanta who’s sent to live with his preacher grandfather (The Wire’s Clarke Peters) in the Red Hook housing projects. Devoid of faith and attached to his iPad, Flik’s adjustment is rough until he meets his spirited, wise-cracking neighbor Chazz. To say more would spoil some of the film’s more controversial developments, but frankly, it’s also difficult to summarize the unfocused agenda here. A fair number of scenes take place within the local church so watching it at times felt like sitting through an actual service.

“This is not a motherfucking sequel to Do the Right Thing,” Lee said after the screening last Sunday night, but it’s easy to see why it would be interpreted as such. For one thing, both films unfold similarly and in the same season, with nothing much happening until the explosive third act. For another, Lee’s pizza-delivering character, Mookie, returns for the first time since the 1989 film. He’s still doing the same job, but proud of it, especially given the current economic climate.

Lee told SPIN he had no particular motive for bringing the character back: “People always call me Mookie. On the street, it’s always, ‘Mookie, Mookie, Mookie.’ That’s the only reason.” He was similarly brief on the topic of institutionalized religion and its attendant controversies: “I had never done anything on the black church. This is a story [cowriter] James [McBride] and I wanted to tell at this time and it’s the story that we could do with a low budget.” And does he believe, as one character says, that Obama has done little but delude kids in the projects into thinking they can become president one day? “I support Obama,” Lee says.”My wife and I just hosted a dinner at our house and raised 1.6 million dollars for him. You can still support someone and question them. He’s fine with it. He called me.”

Ultimately, Lee’s habit of having the actors deliver their lines as if they were on stage makes it so that the story is performative rather than absorbing, though the director is clearly full of ideas.So We asked him one final question: If he shot it today, would the pizza parlor still burn down at the end of Do the Right Thing? “I really try to stay out of the what if business,” says Lee. “That film is done, I’m not going to go back and change it. Bed-Stuy is gentrified now. The pizza parlor is in Red Hook.”

James Murphy Talks About Regrets and Whether He Has Any
As SPIN reported, Shut Up and Play the Hits premiered on Monday night to a packed theater and an enthusiastic audience. The film, directed by Dylan Southern and Will Lovelace, chronicles the final 48 hours of LCD Soundsystem’s existence and is framed as an interview between James Murphy and Chuck Klosterman. SPIN sat down with the directors and LCD frontman to discuss how it feels to relive last April’s memorable show and if, you know, he’s reconsidering anything.

Do you feel like this movie belabors the swan song of LCD Soundsystem?
MURPHY: No, because towards the end of the band I just stopped doing interviews for the most part so we didn’t talk about it a ton. What I’m talking about now is not the end of the band, it’s the movie. If I had not been a part of the film for the last nine months, it might feel like I was being dragged back into this place. But because I’ve been an active part, my brain is set on facilitating it. It’s not a documentary, it’s not a concert movie, it’s a story. It’s about a person quitting a thing that was important to them. It just happens to be my actual life and giving up the biggest thing in it.

How did Chuck Klosterman get involved?
LOVELACE: We wanted it to be authentic to James’ experience. We really liked a previous interview that Chuck had done with him. We approached him directly. I think he did a really good job. There aren’t that many people who would ask those kind of questions in that kind of way.
MURPHY: I like good interviews. You always get people who just want to poke holes or who have already made up their mind about who you are. Chuck didn’t have to believe anything magical about the band to like them. He asked difficult questions without being aggressive.
SOUTHERN: The unabridged interview is amazing. It’s almost four hours long with lots of tangents about exercise and beard shaving.

Were some of the behind-the-scenes moments staged?
MURPHY: Well, we can’t show the interview all the time. Also, we’re not making a documentary. So it wasn’t like, “Let’s follow James and hope he goes on a walk.”
LOVELACE: We did things in the service of the story.

James, your dog, Petunia, seems to play a small but important role in the film in terms of establishing your new life. Was it a conscious decision to include her?
MURPHY: Well, it would have been hard not to put her in the movie because she blew everybody’s mind. She’s a finicky eater and I genuinely fed her in that one scene. You don’t get a dog looking at the bowl and then looking at you and then, pfft, walking away towards the camera. That shit’s crazy. You could get a dog trainer and you wouldn’t get anything better. And I don’t say that just because she’s my dog.
SOUTHERN: Petunia — very difficult to work with. Demanding.
LOVELACE: Her effect on those scenes is great because she just doesn’t give a shit.

Does this film make you nostalgic?
MURPHY: I’m a very nostalgic person. Nancy [Whang] saw it for first time and she was very choked up. But because I’ve been buried in it, I’m not yet. In a few years it might be different. People are like, “Isn’t it weird to be over with?” Well, no, because I wouldn’t be recording right now even if the band were still active. There is a natural time afterwards, and I’m still in that time.

So any second thoughts about calling it quits?
MURPHY: No more than I have every day. I miss it, but I don’t regret it.