Madonna Kicks Off ‘Give Me All Your Luvin” Hype Week

'MDNA' collaboration with Nicki Minaj and M.I.A. is due out on Friday 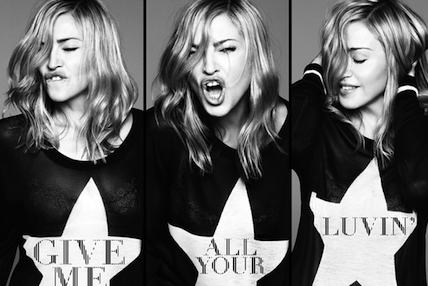 Before Madonna gives us her new single, “Give Me All Your Luvin’,” the pop star who literally wrote the book on sex has the good sense to tease us first.

On Sunday, as previously reported, the Material Girl is set to headline the Super Bowl halftime show, where she’ll presumably perform “Give Me All Your Luvin'” with her collaborators on the song Nicki Minaj and M.I.A. (though that last part still hasn’t been confirmed). Madonna just announced she’ll release the song, the first single from upcoming 12th studio album MDNA, on Friday, both digitally via iTunes and as a YouTube video. But first, on Thursday, a “preview” of the song’s video will appear on American Idol. And right now, below, you can watch about two seconds of the video in what I guess you’d call a “preview of the preview,” though none of the music is audible, below. It’s like living in the future, man.

Madonna is also set to appear tonight on The Tonight Show With Jay Leno. The brief snippet above does little more than confirm her announcement that the “Give Me All Your Luvin'” video will be “football and cheerleader-themed,” in a nod to the Super Bowl. According to the announcement, the song was “written” by Madonna with Minaj, M.I.A., and French DJ/producer Martin Solveig, though Solveig and collaborator Michael Tordjman officially “composed” the song — like raising a child, coming up with a Toni Basil-style cheer that in its leaked demo version goes “L-U-V! Madonna!” takes a village. Madonna and Solveig produced the track.

The full “Give Me All Your Luvin'” video is slated to premiere on Madonna’s YouTube channel at 9 a.m. ET on Friday. In a clever marketing approach, MDNA will be available for pre-order at a price point of $9.99 along with a bonus remix that’s only going to be for sale from Friday through Monday, and fans who pre-order her first album of new material since 2008’s Hard Candy will also get the new single immediately.

In other MDNA news, Madonna has confirmed a list of co-producers for the album. Along with Solveig, she’s also working with the Demolition Crew, Marco “Benny” Benassi and Alessandro “Alle” Benassi, Hardy “Indiigo” Muanza, and Michael Mali. It’s unclear which other guest performers, if any, will be appearing on the record in addition to Minaj and M.I.A., but nowadays it’s generally a good bet there will be more. Hard Candy featured guest vocals from Justin Timberlake, Timbaland, Pharrell Williams, and Kanye West.

Expect a global tour in the second half of 2012, Madonna told the Los Angeles Times. In the meantime, on Super Bowl Sunday, Madonna says she’s not going to repeat Nipplegate, but she does appear to harbor provocative ambitions. “I have 12 minutes and 40 seconds to do something extravagant and exciting in the middle of something that’s quite sacred to all of America,” the pop queen is quoted as saying. “No one’s asked me to tone down my moves.” At this point, it’d be foolish to try — but as with the Super Bowl itself, the hype cycle for MDNA could soon risk drowning out the actual event.