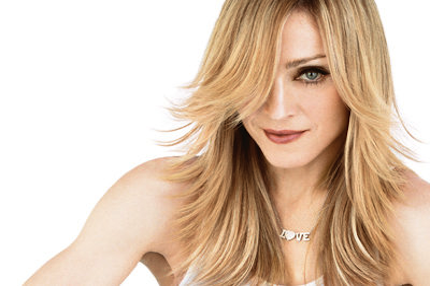 After months of speculation and leaks, and with a Super Bowl halftime performance coming up early next year, it’s finally official: The Material Girl is releasing a new album. Madonna’s follow-up to 2008’s Hard Candy is finished and will arrive in March on Interscope, the label has confirmed. The release will be the first in the pop star’s freshly signed three-album deal with Interscope and Live Nation Entertainment — an arrangement reportedly worth $40 million.

First up is the album’s advance single “Gimme All Your Luvin,” set to arrive in the last week of January. A demo version of the cheery, William Orbit-produced electro-pop track surfaced last month. M.I.A. later revealed on Twitter that she was collaborating with Madonna and Nicki Minaj on a track, widely thought to be “Gimme All Your Luvin,” though representatives for the three artists have yet to address such reports. (Duly noted: When Madonna says she’s in love you best believe she’s in “luv L-U-V.”)

While Madonna celebrates her big news, a trove of tracks purportedly intended for the album have leaked online. The strummy hand-clapper “It’s So Cool” apparently features the Material Girl’s 15-year-old daughter, Lourdes, while Justin Timberlake lends his silky croon to the aggressively syncopated electro banger “Latte.”Other newly leaked Madonna songs include the pulsing, club-friendly motherly admonition “La Petite Jeune Fille” (which begins, “Hey little girl, when you grow up, don’t make the same mistakes I did”) and the frenetic guitar-and-synth track “Run.”

The new album, which doesn’t yet have a title, is only one facet of what looks to be a very busy 2012 for Madonna. The film W.E., which she directed and co-wrote, is set for a wide release on February 3 (and it picked up a handful of Golden Globe nominations this morning). Two days later, the Material Girl will headline the Super Bowl halftime show, in a performance “imagined” by Cirque du Soleil and Madonna’s longtime choreographer Jamie King.

Madonna’s move to Interscope follows a 10-year deal she signed with Live Nation in 2007 — reportedly valued at $100 million in all, of which the current $40 million agreement would apparently be just a part. The “360” deal with Live Nation goes beyond albums to include touring, merchandising, online ventures, DVDs, and other multimedia efforts. Previously, the Material Girl had been signed to Warner Bros. since 1982. Madonna joins frequent comparison Lady Gaga on the Interscope roster, and she follows Van Halen in heading to Interscope after a long career at Warner.